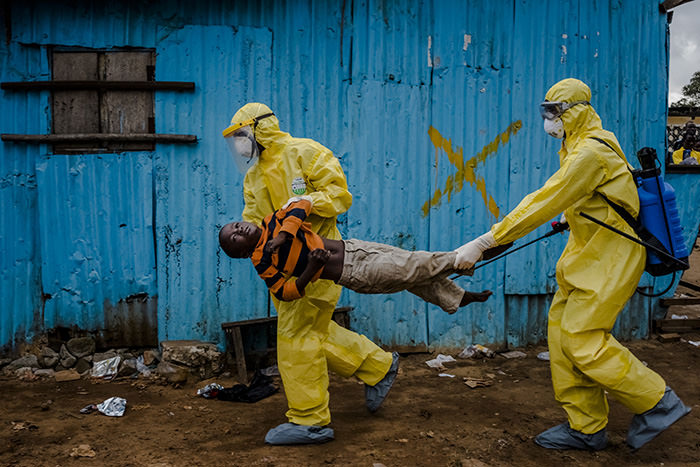 by Anadolu Agency Mar 18, 2015 12:00 am
An image which captures the drama of the Ebola outbreak in Liberia, taken by Australian photographer Daniel Berehulak for the New York Times, has been chosen as Photo of the Year 2014 by the international jury of the 1st Istanbul Photo Awards News Photo Contest.

TIME magazine's International Photo Editor and head of the jury Alice Gabriner said she remembered being hit hard by the powerful image when she first saw it in the New York Times.

She said: "It is even beyond the picture, the picture makes you wanna know more. Than you find out this incredible story."

"Ebola was such a powerful story this past year and that's the reason why we chose this picture."

Gabriner said the quality of the submitted photographs was very good and the world's best photographers were among the applicants.

"For the first year it's very remarkable and I think it will only mean very positive things for what you can be doing in the future and I feel very proud to be part of that first jury," she added.

Pulitzer-winning former photojournalist Liu Heung Shing said he was excited to be part of the jury and that he also thought the quality of the photographs was "surprisingly good".

Prizes in four categories were also awarded to 11 photographers from seven countries in the contest.

About 12,000 photographs from more than 100 countries were assessed in four categories: News Single, News Story, Sports Single and Sports Story by a jury of international professionals gathered in Istanbul on March 14-17, 2015. Turkish Airlines is the "Official Airline Sponsor" of the contest.

The winner of the Photo of the Year and the first prizes in all categories received a cash prize of US$8,000.