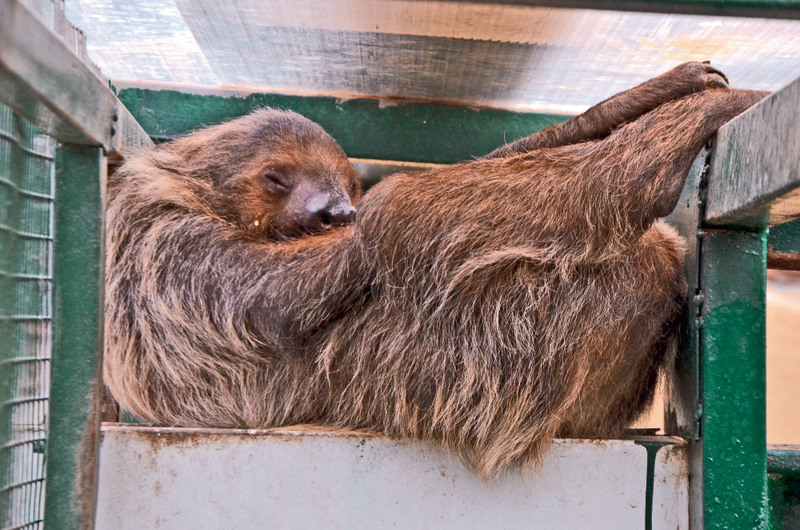 by Anadolu Agency Mar 27, 2015 12:00 am
Considered the world's slowest mammal, sloths, which spend most of the day sleeping on tree branches in their natural tropical habitats, are waiting for visitors at Turkey's Darıca Zoo for the first time. Darıca Faruk Yalçın Zoo and Botanic Park Training and Marketing Manager, Gökmen Aydın, told Anadolu Agency that they are hosting Turkey's first sloths. Explaining that a pair of sloths that were brought from a zoo in Germany are housed and protected in specially designed shelters, Aydın offered information about their behavior patterns.

He said that sloths are slow-moving animals with slow metabolisms compared to other mammals. "They live in Panama and South America, and spend their time in trees in tropical climates, holding on to branches with their hands and feet, and hanging. Hence, the location of their organs is different than other animals. Even their fur grows backwards," he stated. Noting that sloths usually eat fruit and vegetables, the manager underscored that they rarely eat meat. "They do not spend time hunting, since they are lazy animals. They are one of the animals that spend most of their time sleeping," he added. Sloths sleep 15 to 18 hours a day. They are also considered the slowest moving mammal. They have five fingers on their hands and three fingers on their feet, which is a very distinctive feature. They can hang on trees, as their fingers have long nails, and they have a metabolism that enables them to live in the trees without coming down to the ground for a year.

Aydın said that they have built special shelters for the sloths in the zoo, and claimed that they aim to contribute to the sloth population in the world by helping them to reproduce. "Right now, they are living together with armadillos and kuatis, which are also animals authentic to the South America. They will not be bored; after all, they are only active for two or three hours a day," he said. "Our animals are under special care. The temperature of their shelter varies from 20 C to 25 C. We have prepared for them a happy and healthy environment. In the future, we can make small changes according to the animals' nature and their needs. We intend to provide them with an environment where they can reproduce and live happily," he concluded.
Last Update: Mar 27, 2015 2:18 am
RELATED TOPICS