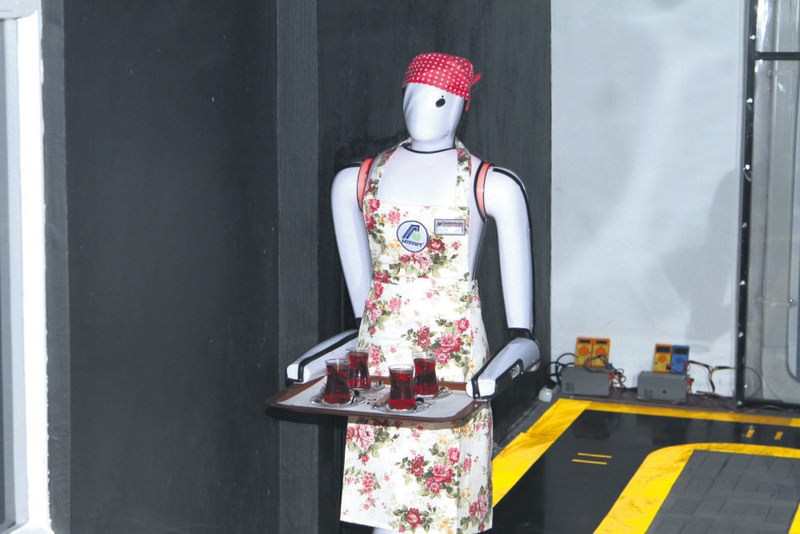 by Anadolu Agency Mar 28, 2015 12:00 am
A cafe where robot waiters offer their services has opened in the Meram district of Konya province. Özgür Akın, the chairman of the board of Konya-based software company Akınsoft, said at the opening ceremony that the cafe is not just a place to drink coffee, but a place that will contribute vision to the sector throughout Turkey.

Explaining that the company's studies on robotic technologies can be observed at the cafe, Akın said: "The cafe is an application center where people can eat and drink while being served by robots." He stressed that once the cafe is up and running they will distribute franchises and commence mass production of the waiter robots and inaugurate their robotics factory within this year. Akın offered insights about the robot named Ada, a 150 centimeter-tall robot that weighs 30 kilograms, and said the robot features location, distance and contrast sensors that help it operate. Explaining that Ada is a robot that has navigation and can determine the location of tables, Akın emphasized that the robot operates with the help of a computer system.

Science, Industry and Technology Ministry Provincial Director Uğur Özalır was also present at the inauguration. Ada served tea to the attendants following the ceremony led by Akın and Özalır. Akınsoft, which produced Ada after six years of work following the production of a robot called Akıncı, aims to begin the mass production of robots operating with artificial intelligence.
Last Update: Mar 28, 2015 2:12 am
RELATED TOPICS