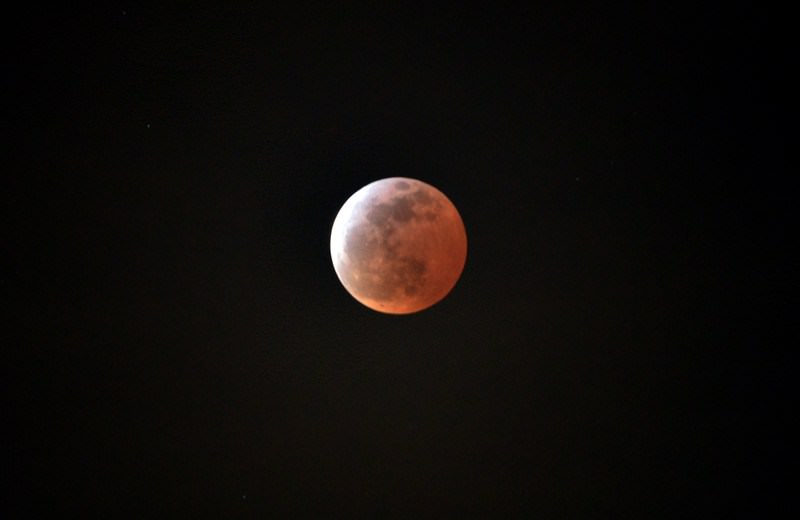 | AFP Photo
by Compiled from Wire Services Apr 04, 2015 12:00 am
The total eclipse of the moon, refered to as 'Blood Moon' lasted only a short time, but it still dazzled.

Early risers in the western U.S. and Canada should have been able to catch a glimpse before dawn Saturday. The moment when the moon was completely obscured by Earth's shadow lasted only a few minutes, making it the shortest lunar eclipse of the century.

Some skygazers complained that clouds prevented them from seeing any of the 3,5-hour lunar show.

People in eastern Australia, New Zealand and Japan viewed the eclipse at night.
In Australia, the Sydney Observatory will host a special event with more than 100 guests, live streaming the eclipse direct from its 16-inch north-dome telescope, although sky-watchers could miss out with cloud and increasing rain forecast.

"With totality only being around five minutes long (in Australia), this particular lunar eclipse will be amongst one of the shortest total lunar eclipses." said Andrew Jacob, the Observatory's curator of astronomy.

"During this time the eclipsed Moon usually takes on a dark reddish colour from the light bent or refracted onto the Moon by the Earth's atmosphere.

"The light is red as other colours such as blue are scattered in all directions leaving red, just as at sunset," he added.


Last month a solar eclipse was visible to varying degrees across northern Africa, most of Europe, northwest Asia and the Middle East.