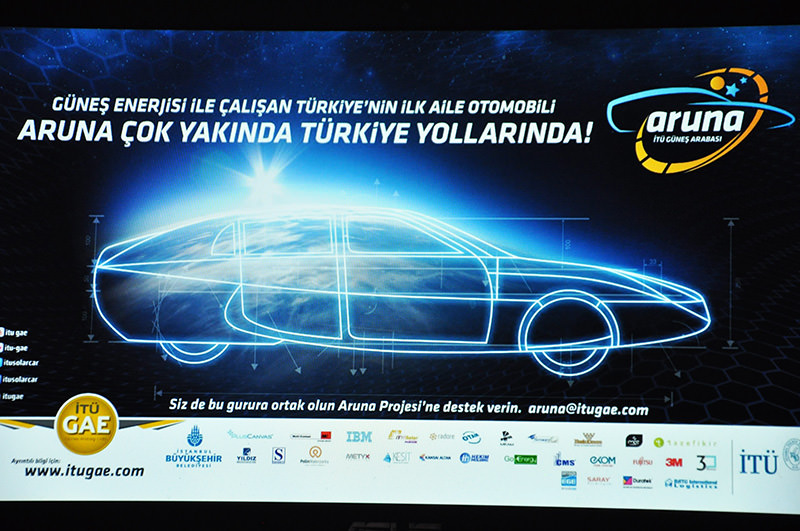 by Anadolu Agency Apr 06, 2015 12:00 am
Istanbul Technical University (İTÜ) Solar Car Team which won 18 cups with the seven cars they built in nine years, is gearing to introduce a brand new car, the "Aruna," which is a personification of the reddish glow of the rising sun and the chariot is pulled by seven horses in Hindu mythology. The Aruna has a four-seat capacity.

Although the team has been building solar cars for the competitions, they intend to build the first Turkish solar car for public use.

The car has been designed to support domestic car production and show people that alternative energy sources can be used in daily life. Composed of 25 people, the Solar Car Team completed the design and handed it over to the contractor company; however, they continue with the construction of the car in their workshop at İTÜ. It is planned that the first draft of the car will be finished by the end of this month, its installation will be completed in June and the car will hit the roads in July. Stating that they have designed a car suitable for mass production, the leader of the team Burak Oklar said, "Unlike our other cars, we designed it to introduce to the market. It is a family car, after all." He stressed that all their works are funded by their sponsors and they expect other people to financially support them.

Aruna features a touch-screen, parking sensor, head-up display and cruise control and works with an accumulator which stores solar energy. "We will be able to charge this accumulator with a 7.5-kilowatt charger unit for two hours. Aruna will be able to travel 500 kilometers with at approximately 70 kilometers per hour with a single tank of solar energy which costs TL 5 ($1.94). "Going home, you will consume the same energy only with the kettle," Oklar added. Stating that Aruna will consume TL 0.01 worth electricity per kilometer, he concluded by saying, "When the brake system that runs on solar energy is installed, the cost will drop to TL 0.008 per kilometer."
Last Update: Apr 07, 2015 1:53 pm
RELATED TOPICS