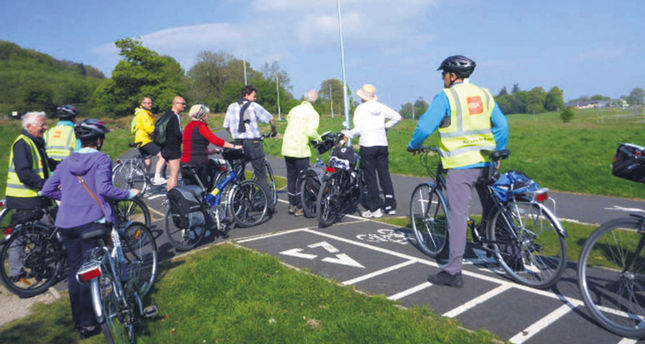 The tour will pass through 12 European cities and cover 2,700 kilometers. (IHA Photo)

The ‘All Routes Lead to Brussels' Cycling Tour that will kick off from Muğla on July 24 and end up in Brussels on Sept. 9 intends to raise awareness of cycling while encouraging people to be more physically active

Muğla Association of Energy Efficiency and Environment Preservation (ENVERÇEVKO), the Turkish coordinator of the International Sport and Culture Association (ISCA) and its "NowWeMove" campaign in 2015, organized a cycling tour titled "Tüm Rotalar Brüksel'e Çıkar" (All Routes Lead to Brussels). The cross-border cycling tour will come to an end when teams reach European capital Brussels by following the European cycle route network (Eurovelo). Ceremonies and celebrations will be held after the tour.

The coordinator of Eurovelo Turkey and the president of ENVERÇEVKO, Feridun Ekmekçi, announced that All Routes Lead to Brussels Cross-Border Cycling Tour will kick off from south-western province of Muğla on July 24, 2015 and will be completed in Brussels on Sept. 9, 2015. A Muğla-based cycling team, which was founded for cultural and entertainment purposes, will pass through 12 European cities covering 2,700 kilometers. "This is not a competition," Ekmekçi said, adding that the aim of the organization is to help connect continents and support cultural activities for a common European citizenship. He informed that the organization will also support all sports and physical activities, especially cycling, for a healthy lifestyle in all the cities the cycling route will take them. "These national events will also include different physical activities and sports events besides cycling. Thus, this organization will provide an opportunity to hold many events to protect and improve our health with the motto "Join and Try," Ekmekçi said. He said All Routes Lead to Brussels, which is affiliated with the NowWeMove campaign, is the biggest sports and physical activity in Europe. NowWeMove, a campaign initiated by ISCA in 2012 to fight with the inactiveness in Europe and organize cultural and sportive activities by involving people and the representatives of the sector.

In addition to the European press release, Ekmekçi informed that Muğla has been planned as the starting point of the cross-border cycling tour. The coordination of the organization is being undertaken by ENVERÇEVKO National Eurovelo Coordinatorship and NowWeMove. According to Ekmekçi, All Routes Lead to Brussels is the most comprehensive international organization to promote the cycling potential of Muğla. "In order to support the regional promotion, local governments and NGOs for environment, cycling, tourism and nature in Bodrum, Fethiye and Marmaris, districts will come together and organize joint press conferences and events on July 25, 26 and 27," informed Ekmekçi. He continued, "Local governments which are on the route of Eurovelo intends to raise awareness for cycling and tourism potential of the region." He said Mustafa Kemal Atatürk's house in Thessaloniki will also be visited as part of the organization. The organization All Routes Lead to Brussels, which is sponsored by PEGASUS Airlines, will be promoted at Velocity Cycling Summit in France that will run from June 1-5, the European Cyclists' Federation's annual general assembly and National Eurovelo Coordinators Meetings. Moreover, the organizers plan to hold a commemoration ceremony in France for French cyclist Christian Jean Auguste Niaffe who passed away in Muğla due to a car accident last year.

Being a tourism gem with its natural beauties, Muğla is drawing attention with its claims to take a share from the bicycle tourism sub-sector.

At the beginning of this month, between April 28 and May 2, Marmaris Bicycle Festival was initiated at Muğla's Marmaris district, with the support of South Aegean Development Agency (GEKA), as part of the Marmaris Bicycle Routes Project, and many domestic and international cyclists attended the festival.

Share on Facebook Share on Twitter
Previous in Life An almost $1-million-dollar project has seen a fleet of Venice-style... Next in Life If you are still looking for somewhere exotic to go this summer and...
DAILY SABAH RECOMMENDS