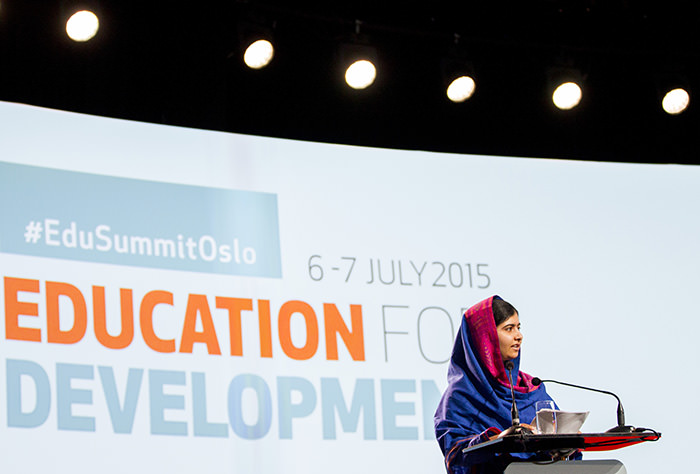 Nobel Peace Prize winner Malala Yousafzai speaks during the Oslo Summit on Education for Development at Oslo Plaza in Oslo, Norway, Tuesday, July, 7, 2015 (AP Photo)
by Jul 07, 2015 12:00 am
Nobel Peace Prize laureate Malala Yousafzai said on Tuesday that diverting eight days of global military spending could ensure 12 years of free primary and secondary education to every child in the world.

"Books are a better investment in our future than bullets," the young Pakistani education activist told delegates from about 40 countries at an education summit in the Norwegian capital Oslo.

The sum of 39 billion dollars each year "may appear a huge number, but the reality is that it is not," she said, adding that it equals what the world spends on the military for eight days.

"The issue is not that there is not enough money, the issue is the lack of commitment from world leaders to invest in education," Malala said.

The visit to Oslo was the 17-year-old's first since December when she accepted the Nobel Peace Prize.

Malala was shot in the head by Taliban militants three years ago because of her lobbying for the right of girls to education.

At the conference, Norwegian Prime Minister Erna Solberg announced that Chile, Indonesia, Malawi and Norway along with the head of the UN agency UNESCO have launched an international commission on how to improve funding for education. Funding has dropped since 2010.

Key areas included ensuring the education of girls, the quality of learning and teaching, and education in emergencies, Solberg said.

UN Secretary General Ban Ki-moon endorsed the commission at the same conference, noting that less 2 per cent of humanitarian aid goes to education in crisis areas.

The commission's recommendations are to be presented in 2016. It will be led by Gordon Brown, former British prime minister and now UN special envoy on global education.

Universal primary education is one of the so-called UN millennium development goals adopted in 2000. Later this year, the UN plans to launch new global benchmarks, sustainable development goals, for the coming 15 years.

Malala urged that free secondary education be included among them.

Brown said that about 59 million children worldwide are still out of primary school, while another 65 million do not get secondary education, while 500 million girls will not finish school.
Last Update: Jul 07, 2015 4:05 pm
RELATED TOPICS