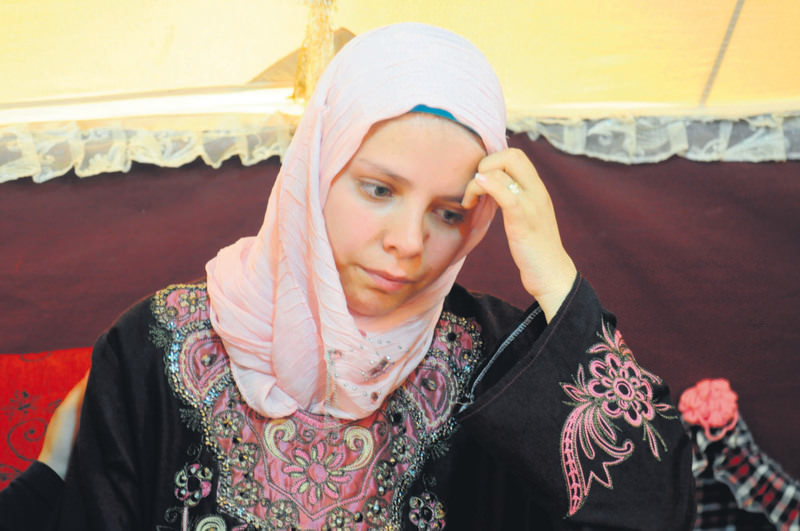 Abir Yetim will give birth to a baby soon and she is greatly concerned about the future of her children.
by Daily Sabah with AA Jul 15, 2015 12:00 am

Syrian refugees who fled the civil war in their country as well as ISIS to continue their lives mostly in tent and container refugee camps in Turkey are preparing for Eid al-fitr with anxiety. They also hope that it will be the last one they spend away from their homeland

Taking shelter in camps around different cities in Turkey, Syrian refugees who have fled the ongoing war in their homeland are sorrowfully spending another holiday away from their home.

Syrian refugees have been staying in tent and container refugee camps prepared by the Prime Ministry Disaster and Emergency Management Agency (AFAD) for the last five years. Regarding Turkey as a safe harbor, refugees are kept in the best conditions, but they will spend the upcoming Eid al-Fitr without seeing their relatives or homes. They would love to spend the upcoming holiday in a peaceful Syria away from war. Although they are confronted with many obstacles, Syrian refugees are preparing for the holiday. They are shopping with the cards given out in the camps and preparing traditional dishes for each other.

Syrian Kurds who took refuge in the camp in Şanlıurfa's Suruç district after fleeing from Kobani due to the attack on the town by the Islamic State of Iraq and al-Sham (ISIS), will spend Eid al-Fitr away from their homes and in a camp for the first time. One of the refugees, Bekir Sheyho told an Anadolu Agency (AA) reporter that he fled to Turkey with his wife, brothers and mother, but his father was captured by ISIS. He said his family is properly hosted at the camp.

"We are spending Eid al-Fitr away from our home for the first time. I hope it will be the last time, yet our hopes are diminishing every day. We feel good here regardless of our suffering, but I have no news from my father. I do not know if he is alive or dead. If he is dead, I want to know where his grave is. We are preparing for eid with the opportunities offered us here. I hope that what is happening now around the Islamic world will end soon," he said.Residing in the Süleyman Shah Accommodation Facility in Şanlıurfa's Akçakale district, Hussein Abdullah, who lost his five sons and his son-in-law in the war, said that it has been four years since he left Syria. He said despite all the disadvantages, they will celebrate Eid al-Fitr in Turkey. "The ongoing civil war prevents both those in Syria and refugees from celebrating Eid al-Fitr properly. Turkey provides us with every opportunity, but your homeland is different. We are safe in Turkey, which is as important for us as eid," he said, adding that he wants to see his sons' graves, although he is afraid of Islamic forces and aircraft. "I hope I can return home when the war ends and can see my sons' graves. It will be a real eid for me," he added.

Sabiha Ahmet has been living in Turkey as a refugee for the last two years. She said the upcoming holiday is full of sorrow for them as their country still suffers from the war. Ahmet said that patriotism is an indispensable value. "I can't describe eid as a holiday if I am away from my house, mother, brother and father as well as loved ones. If I am not with them, eid means nothing to me," she said. Ahmet expressed her thanks to President Recep Tayyip Erdoğan and all the authorities for their generous support.

Similarly, 17,500 Syrian refugees living in the Kahramanmaraş camp will also be waiting for eid with sorrow. Among them, Abir Yetim has been living in Turkey for the last four years. She said she will have a baby soon and is greatly concerned about the future of her children. "I wish my mother and father could be here. I think eid is a normal day, it does not mean anything to me. They do everything for us here. I am grateful for their support, but as you know there is a saying that if you put a nightingale in a golden cage it asks for its home," Yetim said. "Even though I can live here, I want to return to my home," she continued. "I left my family and country and came here. It is a deep wound. These tents have become my home."

Fadiye Aslan also said she took shelter in Turkey with her four children, but has never enjoyed the eids she spent in the camp. Aslan said her family does not come together any more. Syrian refugees living in the refugee camp in Kilis's Öncüpınar district have also started preparations for Eid al-Fitr. Amir Hurabi, who has been living there for the last three years, said that he lost one of his children in the war. "We are away from our relatives and friends now. We feel unhappy. I hope we can return when the war ends. I still have hope for it," he said. Hurabi's wife Raghde said that she misses her relatives in Idlib. "I will go home one day," she said, while expressing her thanks to the Turkish government and people for their support.
Last Update: Jul 15, 2015 7:56 pm
RELATED TOPICS