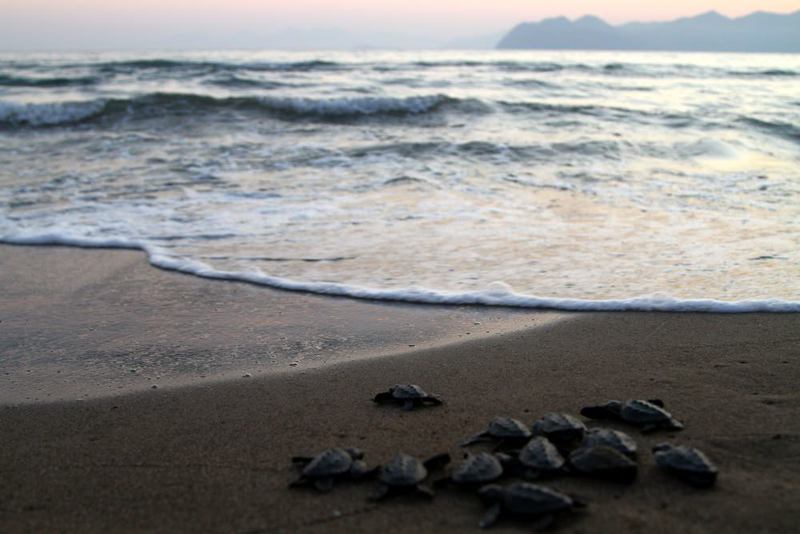 by Daily Sabah Jul 24, 2015 12:00 am
Baby caretta carettas (loggerhead sea turtles), which have recently hatched, have entered the sea at İztuzu Beach, one of the most important breeding grounds for caretta carettas in Muğla's Ortaca district. They are carefully followed by officers from the Center of Research and Rehabilitation for Sea Turtles (DEKAMER) at Pamukkale University.

As part of a project run by the General Directorate of Cultural and Natural Heritage under the Ministry of Environment and Urban Development, all nests are closely monitored by DEKAMER.

Some baby caretta carettas, which are unable to enter the sea, first stay for a day at the center and then leave for the sea after sunset.

Speaking to Anadolu Agency, Çisem Sezgin from DEKAMER said İztuzu Beach is an ideal reproduction area for caretta carettas. "At DEKAMER, we have many volunteers from all around the world. They help us in monitoring baby caretta carettas, and the recording and protection of nests. Some baby turtles are born in hot temperatures, which makes them weak. Such baby turtles are first housed at the center and then enter the sea in the evening," Sezgin concluded.
Last Update: Jul 24, 2015 11:32 pm
RELATED TOPICS