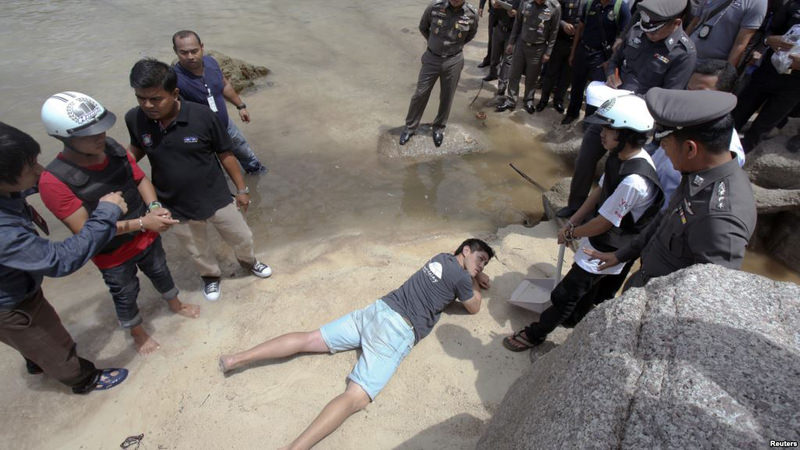 In Thailand, the public doesn't have to settle for "perp walks," where police trot high-profile suspects past the media on their way to court or jail. Authorities here make the accused go through all the motions of their alleged crimes robberies, murders and even rapes while the cameras roll. The re-enactments are so much like theater that actors are sometimes hired to play victims. A long-running debate over their fairness and usefulness was reignited this week when a key suspect in last month's Bangkok bombing that killed 20 people retraced his alleged steps with armed commandoes, senior police officers and throngs of media in tow.

The public watched on live television, social media and from the sidelines Tuesday and Wednesday as police escorted Yusufu Mierili around the shrine where the bomb went off Aug. 17 and other sites they say are connected to the attack. Officers dressed him in a flak jacket.

"We were afraid he might get shot," national police spokesman Prawut Thavorsiri said. "It was just a precaution." Thai police often put suspects in body armor during re-enactments to protect them from angry mobs, who sometimes lash out at them. Crowds were calm during the bombing reconstruction, which largely involved Mierili and investigators pointing at various things.

Police say re-enactments help investigators visualize the crime, but legal experts say they violate suspects' rights and should be abolished.

"It goes against the universal rule of human rights that a suspect is innocent until proven guilty," said Pimpatsorn Natipodhi, a legal scholar with the Thailand Institute of Justice who says the re-enactments convict a suspect in the eyes of the public before a trial is held.

"It serves mostly as PR for the police, to showcase to the public that police have done their job and solved a crime," said Pimpatsorn.

Thailand's National Human Rights Commission opposes public crime re-enactments, said Amara Pongsapich, head of the commission. But she said that since there is no major movement to stop the practice, the commission has urged police to conduct the reconstructions in private without the media and public present and to respect the basic rights of both suspects and victims.

"The accused should have the right to a lawyer," which is seldom the case when suspects are poor and uneducated, Amara said. "In the case of victims, these re-enactments violate their right to privacy." Sometimes victims are asked to play themselves in the re-enactments, although for violent crimes police call in substitutes. Sometimes the stand-ins are actors and actresses, which has added to criticism that the reconstructions resemble staged theater with the police acting as directors.

"We always see the police pointing fingers, dictating what the suspects should do and where they should stand. They hand suspects tools or objects used to commit the crime," said Pimpatsorn. "In cases of rape, they find an actual woman to come and play the victim. That is wrong, and bizarre." Scenes like this were played out last year when police re-enacted the murder of two British tourists on the island of Koh Tao, another high-profile investigation. They led the two suspects, a pair of Burmese laborers in flak jackets and motorcycle helmets, to the beach alcove where one of the tourists was raped and both were bludgeoned. Police handed them large wooden mallets and told them to demonstrate the killing. Two foreigners watching from the sidelines were asked to play the victims. The two Burmese suspects, who are currently on trial, later said through lawyers and in court testimony that they are scapegoats who were tortured by police into confessing.

Thailand's police force is infamous for corruption, taking bribes and coercing confessions. Police chief Somyot Poompanmoung said Thursday that at least one of the suspects in the bombing network is known to have entered Thailand multiple times on fake passports after paying bribes at border crossings. Police say crime reconstructions help them complete a picture, but also acknowledge that they are partly intended as public shaming to discourage people from committing crimes.

"If you ask me if this is useful, it is useful," said Prawut, the police spokesman. "It allows us to understand more than we would just from interrogating him. He can explain what he did at the actual place." Police have arrested two suspects in the Bangkok bombing but say much about the case remains a mystery, including the identity of the bomber, the plot's mastermind and the motive.

They conducted the re-enactment with Mierili at the bombing site, two apartments where they found bomb-making materials and Bangkok's main train station. They say Mierili confessed to picking up a backpack with explosives from one of the apartments and delivering it to a man in a yellow shirt the presumed bomber at the train station. Police say that from there, Mierili said he traveled separately from the bomber to the attack site, the Erawan Shrine, to take pictures of the explosion. Police say no photos have been found. Police say Mierili told them he waited on a bench outside the train station to deliver the backpack bomb. "There are many benches, we didn't know which one. But he shows us the bench and we see why, because he could see the yellow shirt man coming clearly from there," said Prawut.

An image of Mierili laughing during the re-enactment was widely circulated on social media this week, leading many to question what possibly could have been funny about the bombing. Prawut said he wanted Mierili to feel "feel more relaxed." "I said, 'Don't you remember what you were doing here?' Think hard! Are you confused today?'" Prawut said. "It's a psychological technique. I wanted him to talk more. I have a master and doctoral degree in psychology."
Last Update: Sep 12, 2015 1:56 am
RELATED TOPICS