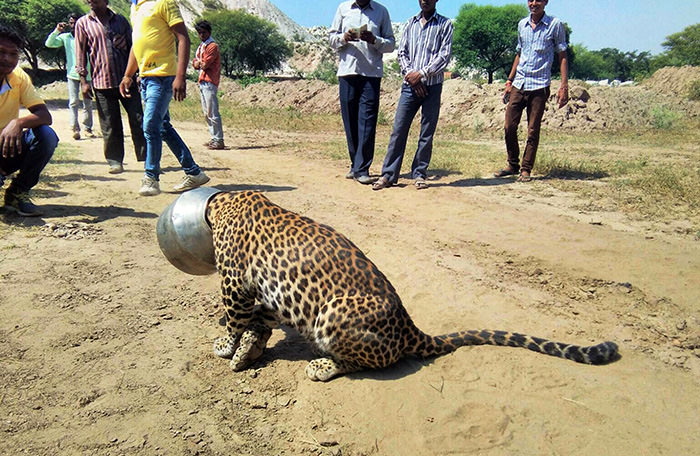 People stand around a leopard with its head stuck in a vessel in Rajsamand district of Rajasthan state, India, Wednesday, Sept. 30, 2015 (AP Photo)
by German Press Agency - DPA Oct 01, 2015 12:00 am
A thirsty leopard that wandered into an Indian village had its head stuck in a metal pot for 12 hours before being freed by local vets, news reports said Thursday.

Video footage showed the distressed feline, which had apparently put his head into the pot in search of a drink, wandering blindly around the village in northern Rajasthan state.

While crowds gathered to take pictures and videos on their mobiles, no one dared to help the powerful cat, the Kolkata-based Telegraph daily reported.

The leopard had to wait for 12 hours before forest officials tranquilized it and vets yanked the pot off its head, local forest official Kapil Chandrawal told the paper.

The cat would be released back into the jungle, he said.

Leopards and other wild animals often stray into cities and towns in India, sometimes attacking people and at other times being attacked.
Last Update: Oct 01, 2015 11:12 am
RELATED TOPICS