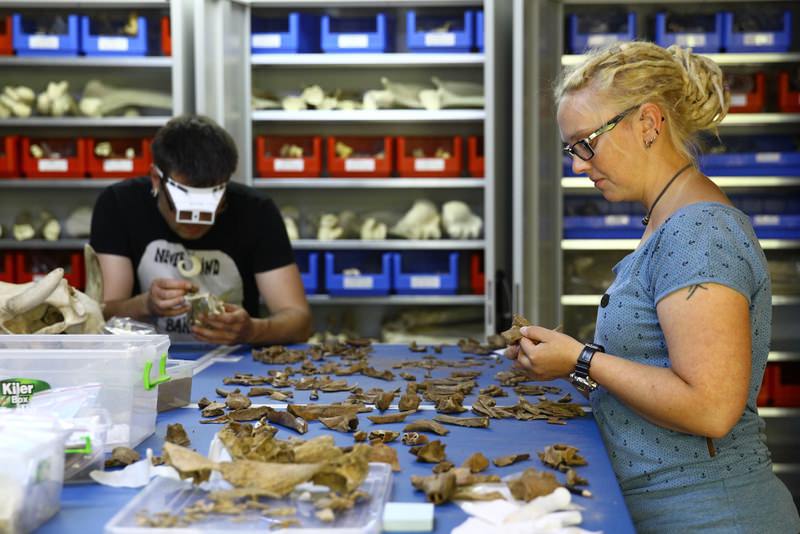 by Anadolu Agency Oct 06, 2015 12:00 am
A group of bones uncovered in the ancient city of Ephesus, a UNESCO World Heritage site, demonstrated that leopards and rhinoceros once commonly existed in the region. The bones are currently being examined at BoneLab Ephesus, a laboratory housing Turkey's biggest bone collection from the excavation area, where a team of archaeologists undertake scientific studies. The laboratory provides a rich reference collection for archaeozoologists with many bones of different animal species. Experts research animal species, their body structure and date of death. The recently opened space also allows for cooperation between students and guest scientists on scientific projects. Speaking to Anadolu Agency (AA), archaeozoologist Alfred Galik of Vienna Veterinary University's Institute of Anatomy, Histology and Embryology said the team is researching how the animals were hunted, used and bred in ancient times.

The team compares the bones they find with other examples to define the species. "We compare bones with those of sheep, goats, leopards, rhinos and buffalo," he said, adding that certain findings show that some bones were masterfully shaped. Archaeologists also revealed findings on other wild animal species. "We came across different animal species that are not normally seen in this region such as leopards, rhinos, red deer and fallow deer," he said, stressing that animal bones shed light onto the lifestyle of ancient people. The bones found on a hillside area demonstrated that locals lived a wealthy life there and consumed fresh meat and expensive marine products. They also had pools in the courtyard of their homes where they could breed fresh water fish like carp and pike perch. The ancient city of Ephesus has a history that dates back to the Neolithic Age and lived its golden age at the time of the Roman Empire and Hellenistic Period. It was also the Roman capital of Asia Minor.
RELATED TOPICS