Endangered monk seals to be protected by new project 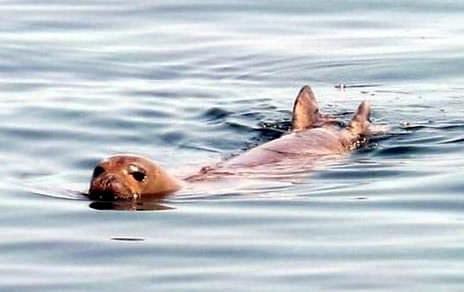 by Ihlas News Agency
Oct 07, 2015 12:00 am
An action plan is being prepared to protect the habitats of Mediterranean monk seals, a critically endangered animal added to the IUCN Red List of Threatened Species, in the southern province of Muğla. Although several different ecosystems thrive in Turkey, there has been a 30 percent decrease in the number of certain animal species, including Mediterranean monk seals, since 1970. Speaking during a workshop, Osman Malkoç of the Ministry of Forestry and Water Affairs said that the ministry prioritizes biodiversity and cooperates with related institutions.

A team from Eastern Mediterranean University (DAÜ) conducted a comprehensive study on seals throughout the summer, said DAÜ hydrobiologist Burak Ali Çiçek. With the support of the ministry, the team studied the inns and other habitats that seals live in. "We observed mother and baby seals and discovered some new inns. The locations of certain inns were recorded through GPS. The inns and other habitats that require protection will be recorded and presented in a report. The team made a field visit from the ancient region of Patara to Milas coast. They have marked 12 inns so far and found 36 small and big inns. Çiçek said that it is difficult to count the number of seals in the area. "We carried out three independent observations and recorded them. Our study is not focused on observing seals, but protecting their habitats. Inns are of significance for us. This is because they were our starting point," he said.

Nesimi Ozan Veryeri, the President of Underwater Research and Mediterranean Monk Seals Research Group, commented regarding the findings of the environmental impact assessment reports (ÇED). "Our coasts are very valuable. Mediterranean monk seals have lived there for 30 million years," he said. In the 1990s, Turkey's population was around 45 million, yet it has reached almost 80 million these days. Around 60 percent of the population lives along the coastal regions. "This is why most of the changes are seen in rivers, underground water, fresh water, seas and coastal ecosystems. Muğla is one of the most important regions of Turkey in terms of its agricultural area, tourism potential and water and forestry ecosystems," he said. In the upcoming days, a two-day workshop will be run and will focus on protecting the coastal areas of Muğla. The habitats of Mediterranean monk seals are prone to illegal settlement and destruction. They are also negatively affected by over-fishing, sea pollution and physical and chemical transformation. Veryeri said that the General Directorate of Nature Protection and National Parks and the General Directorate of Spatial Planning have critical responsibilities toward the protection of these coasts.