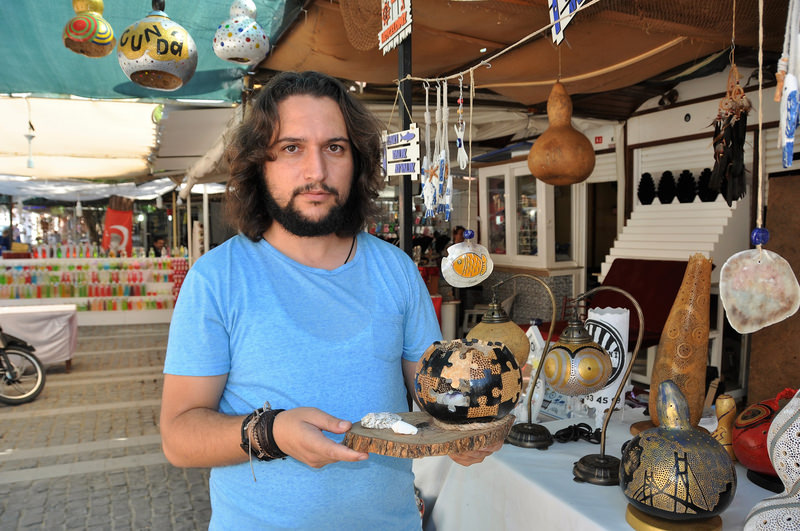 by Daily Sabah Oct 19, 2015 12:00 am
Gökhan Güngör, 36, a hospital health worker, left his job for his hobby and settled on Ayvalık's Cunda Island to produce souvenirs like trinkets, jewel boxes and lamp shades made from calabash. Güngör was working at an Istanbul hospital, but two years ago, he designed a lamp shade from a calabash, which he received as a gift, and later made a few more designs using calabash. Speaking to Anadolu Agency (AA), he said his designs were appreciated by his friends. "Then it turned into a hobby," he said. When he had spare time he designed more products and gave them as gift to others, and then he began to receive orders.

"When my hobby facilitated earning money, I decided to think it over. On the one side, there is my permanent job for which I spent years as a health worker, and on the other side, I have a hobby that entertains me. I talked with my family as I wanted to do something interesting in my life. I left my job and settled on Cunda Island with my family," Güngör explained. The prices of his products range from TL 30 to TL 300 ($10.37 to $103.74). He additionally uses materials made of olive trees for his products. "This job turned into a lifestyle for me. I quite enjoy it. My wife helped me with painting. We have made a new life with calabashes, which opened a new door for us," he said. Güngör said getting admiration from people is more important than his new job's financial aspect. Calabashes have been used for different purposes throughout the centuries. At the time of the Ottoman Empire, water bottles for Janissaries were made from calabashes.
Last Update: Oct 19, 2015 1:01 am
RELATED TOPICS