Uludağ set for first snow of the year with new services 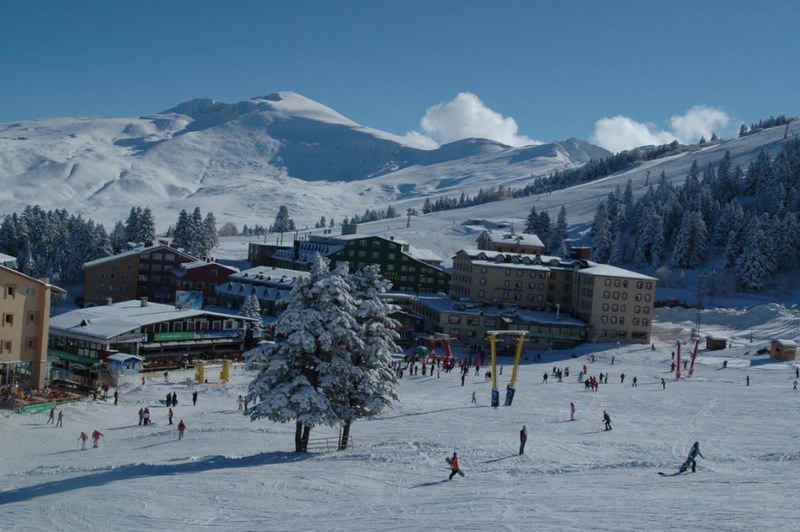 by Daily Sabah Oct 20, 2015 12:00 am
With winter on its way, Uludağ is getting gearing for the new skiing season. One of the most popular destinations for ski-lovers, Uludağ has been offering its services in the winter season since 1933. As it is located within the borders of Bursa, the fourth biggest province in Turkey, and is close to other metropolises, Uludağ has become the biggest skiing center in Turkey. Apart from a variety of outstanding ski resorts that are affordable, Uludağ attracts scores of tourists and skiers with its long winter season and high levels of snow that stay on the ground for about five months of the year as well as the distinguished view of Istanbul and the Marmara Sea, which can be seen from its summit. The natural beauty of Uludağ is one of the reasons for Uludağ being the first choice for both local and international tourists. Uludağ National Park, which was taken under protection in 1961, covers a 12,762 hectare area. It can be reached via automobile or cable car. The area offers its visitors the chance to see the rare flora of Uludağ, which is a passive volcano, as well as a rare local butterfly, "Parnassius apollo graslin." Tourists can either stay at the resorts spread over the area or camp within the reserved area on the site.

The Bursa Metropolitan Municipality has begun working on new projects in order to prepare Uludağ for the skiing season. Zirve Hill, with an elevation of 2,453 meters, was not operating fully for years as the mountaineering shelter on the hill was demolished. In an initiative by the Bursa Metropolitan Municipality, the shelter has been renovated with the latest technology in order to answer the needs of the Mountaineering Federation of Turkey and other skiers and mountaineers. The shelter, which was built 60 years ago with the tools and equipment carried by animals, is an important structure for mountaineers and skiers if they are unable to get off the hill.

The shelter, which was partly demolished and is out of date, has been renovated with the utmost care to prevent harm to the natural habitat of the area. The metropolitan municipality carried 20 tons of iron, sand, cement, paint and water in 600-kilogram packages with a heavy-lift helicopter and fuel tanker. To carry the accommodation and food needs of the construction personnel as well as the materials that are needed for construction, the helicopter made 60 rounds between the hill and the resort site of Uludağ. As the weather conditions around the hill are ever-changing and harsh, the moving process was completed in four days. The construction and renovation process of the shelter, which kicked off in August, was finished in two months. The mountaineering shelter will be an important safe zone for mountaineers and skiers while undertaking an important mission to make Uludağ a safer and healthier tourism and sports center. The metropolitan municipality held a ceremony to celebrate the reopening of the shelter. The ceremony was overseen by Bursa Metropolitan Municipality Deputy Mayor Abdülkadir Karlık, the founder of the Search and Rescue Foundation (AKUT) Aziz Doğan, and a total of 260 mountaineers from 18 different mountaineering clubs.
RELATED TOPICS