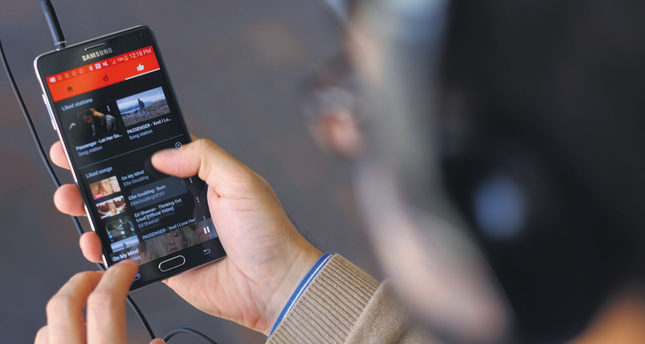 Watching a YouTube video on a cellphone is often a very exhausting mission for Asmaa Mohsen. Instead of sitting in front of a TV screen, the 19-year-old student likes watching her favorite clips and movies on her cellphone. But the slow Internet speed and its poor quality often turn this hobby into a tiring mission. "Many YouTube videos keep buffering for a long time before opening and some clips even fail to open," Mohsen said.

Now, the young Egyptian girl has a chance to watch her preferred clips despite the poor Internet service, thanks to a new service called "YouTube Offline." Google has presented the feature this week to help users in Egypt, Algeria, Jordan, Libya and Yemen watch their favorite YouTube videos even without an active Internet connection.According to Google, users in the five Arab nations can save a video for offline viewing by tapping on the offline icon. Once saved, the video can be played without an Internet connection for up to 48 hours. "The majority of YouTube videos in Egypt, Algeria, Jordan, Libya and Yemen will become available for people to view offline, from popular talk shows to local comedy," Google said in a blog post.

Joyce Baz, regional communications manager for Google MENA, said the offline playback aims to help users enjoy smooth, buffer-free videos despite the slow Internet speed in their countries. "We want to give our YouTube mobile users the best possible experience online with a lesser burden on data and speed," Baz told Anadolu Agency in comments by email. "We've been working on ways to lessen the demands of speed and data for people using our products in places where there are challenges to access of data connection, speed and cost."Egypt is among the 15 slowest countries for Internet speed, according to the NET INDEX interactive map. The average download speed in Egypt reaches 2 mbps, while the average global download speed is 23.2 mbps, according to NET INDEX.

While the cost of the service in Egypt is estimated at $26.3 per month, the average cost of the service globally is estimated at $5.2 per month. "The monopoly of Telecom Egypt, the country's main telephone and IT company, is the cause of all ills," Hani Mohamed, an IT expert, told Anadolu Agency. He said the IT infrastructure in Egypt is being controlled by the national company.

"This monopoly causes Internet prices to hike up," he said, adding that prices of phone calls in Egypt have drastically dropped in recent years after the government allowed mobile phone firms to compete with Telecom Egypt. "The authorities should open the IT market for other competitors to help the prices to go down and the service to improve," Mohamed added. In recent weeks, a group of youth has launched a cyberprotest against Telecom Egypt's monopoly of Internet services in Egypt. The Facebook page of the campaign has drawn more than 1 million followers in a few weeks and continues to expand.

Share on Facebook Share on Twitter
Previous in Life Scans of King Tutankhamun's tomb in Egypt's Valley of the Kings point... Next in Life The Raspberry Pi Foundation, a U.K.-based nonprofit organization that...
DAILY SABAH RECOMMENDS