Paintings of Syrian children on display in Istanbul 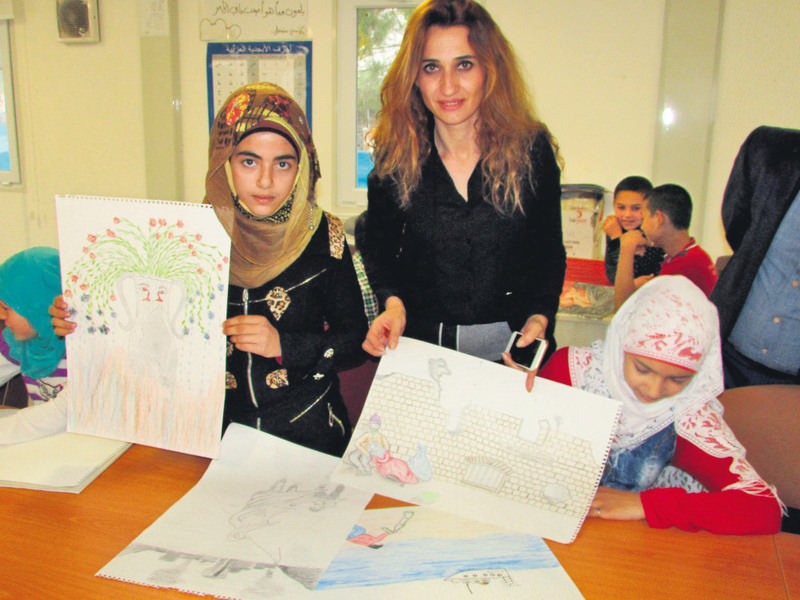 by Daily Sabah Dec 05, 2015 12:00 am
Syrian children living at accommodation facilities in Gaziantep's İslahiye district drew the civil war in their homeland, the tragedies they have gone through and their longing for peace. As a part of the "Let's Draw a Picture" project initiated by the Faculty of Economic and Administrative Sciences at Gaziantep University, young refugees shared their hopes and dreams via paintings. The paintings drawn by the children are being displayed at Kadir Has University's Cibali Campus.

Offering information about the project and the exhibition, Gaziantep University's Faculty of Economic and Administrative Sciences Deputy Dean Associate Professor Çiğdem Boz said they asked children between the ages of 11 and 16 to express themselves in painting and draw their hopes and wishes for the future. She said children mostly preferred to draw rockets, tanks, blood, fleeing refugees and tents. Boz said that their aim is to reach out to the inner worlds of refugee children through art and cover the traces of war with paint. She said the project initiated by the university also aims to raise awareness about social responsibility among their students. "We have to live together with Syrian refugees," said Boz who continued to point out that "they did not come here willingly. In order to live together we need to understand each other. We want to reach out their inner worlds and think how we can integrate them into our society." Boz said they provide fine arts education to some of the refugee children in Gaziantep as they cannot receive it on their own. "They might shine in this exhibition if somebody helps them," she added.

Commenting on the interest that Syrian children show in painting, Boz said, "The number of Syrians living in İslahiye, Gaziantep is close to İslahiye's pre-war population. We hope these children become the Picassos and Van Goghs of the future." Kadir Has University Vice Chancellor Professor Hasan Bülent Kahraman underscored that every university in Turkey should initiate projects intended for refugees who are seeking shelter in Turkey. "The sensitivity of the academics in İslahiye is proof that universities are not places where people develop abstract theories. I believe that this project is a useful and creative initiative," Kahraman said. He told the press that the refugees that came from Syria are an important issue and continued, "These people are living on the streets; the ones who are living in the refugee camps can be considered lucky. They are in need of shelter, clothes and food; however, refugee children have other needs. We cannot approach these children as foreigners. Children are creative. This exhibition and project is an important opportunity for children." The exhibition at Kadir Has University in Istanbul has 50 paintings on display. The display can be seen until Dec. 6.
RELATED TOPICS