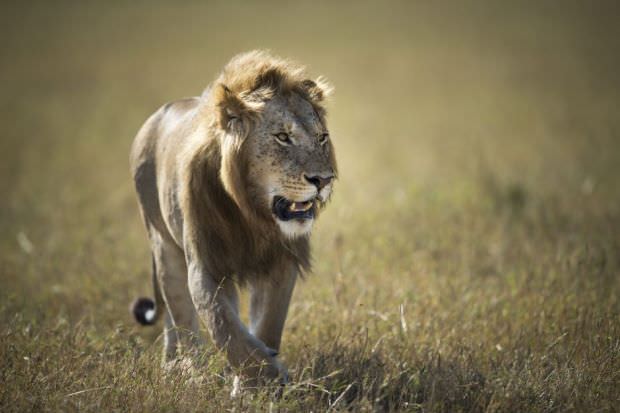 |EPA Photo
by Dec 08, 2015 12:00 am
Eight members of a pride of lions that featured in a popular wildlife documentary series have been poisoned in Kenya's Masai Mara reserve.

One more is missing and at least five are being treated by vets, a conservation group and a BBC wildlife crew at the scene said.

"I am sick to the heart to hear of the poisoning of the Marsh Pride lions, and horrified to think of the pain they suffered as they died," said Saba Douglas-Hamilton, a Kenyan conservationist and television presenter who worked on Big Cat Diary.

Jonathan Scott, a zoologist and one of the show's original presenters who has been following the Marsh Pride for nearly 40 years, lamented the poisoning as the "end of an era".

Among the dead lions was 17-year old female Bibi, who had become something of a celebrity during the TV series' long and hugely popular run from 1996-2008.

The BBC crew said Bibi was found "lying on her side, foaming at the mouth, fitting and panting" before she died.

Conservationists first noticed something was wrong on Sunday morning when some of the lions, "were acting strangely collapsing and suffering from spasms," according to a statement from the David Sheldrick Wildlife Trust which funds a mobile veterinary unit in the reserve.

Local cattle-herders who frequently bring their animals into the Masai Mara National Reserve to graze are suspected of the poisoning.

"Tens of thousands of cattle encroach into the reserve every night when visitors are safely out of sight," said Scott.

The grazing cattle are hunted by lions, bringing the herders into conflict with the cats.

"There is nothing shocking anymore as to what is happening in the Masai Mara," he added, blaming years of "appalling management" by local authorities.

Three men were due to be charged with poisoning the lions, according to the Kenya Wildlife Service, and could face a maximum 20 million shilling ($196,000) fine or life imprisonment if found guilty.