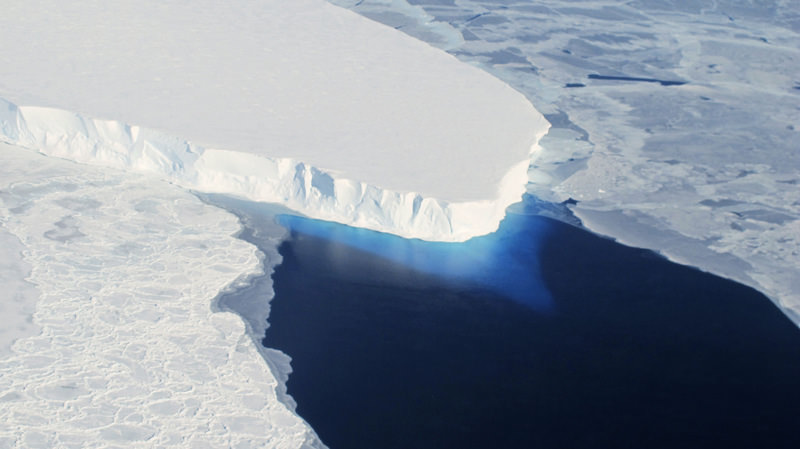 The Thwaites Glacier in Antarctica is seen in this undated NASA image. (REUTERS Photo)
by Dec 13, 2015 12:00 am
The melting of glaciers caused by the world's rising temperatures appears to be causing a slight slowing of the Earth's rotation and lengthening days in another illustration of the far-reaching impact of global climate change, scientists said on Friday.

The driving force behind the modest but discernible changes in the Earth's rotation measured by satellites and astronomical methods is a global sea level rise fueled by an influx of meltwater into the oceans from glaciers, the researchers said.

"Because glaciers are at high latitudes, when they melt they redistribute water from these high latitudes towards lower latitudes, and like a figure skater who moves his or her arms away from their body, this acts to slow the rotation rate of the Earth," Harvard University geophysicist Jerry Mitrovica said.

The movement of ice and meltwater is also causing a slight migration of the Earth's axis, or north pole, in a phenomenon known as "polar wander," the researchers said.

"Imagine a figure skater who doesn't stick their arms straight out but rather sticks one at one angle and the other out at another angle. The figure skater will begin to wobble back and forth. This is the same thing as polar motion," Mitrovica said.

The research looked at the changes in the planet's rotation and axis in light of the world's sea level rise in the 20th century as a result of increasing global temperatures.

The melting of the ice sheets and the rise in sea levels moved the planet's rotation axis, or north pole, at rates of less than a centimeter per year, Mitrovica said. This melting slowed the Earth's rotation and increased the duration of a day by about a thousandth of a second over the 20th century, Mitrovica said.

"These are small effects," but are another indication of the profound impact of human-induced climate change on the planet, Mitrovica said. The observed rotation slowdown does not pose a danger to the planet, he said.

If polar ice sheets melt at higher rates this century, as experts forecast them to do, the impact on Earth's rotation will grow, Mitrovica said.

The research was published in the journal Science Advances.