Dutch students get a scary taste of refugee life 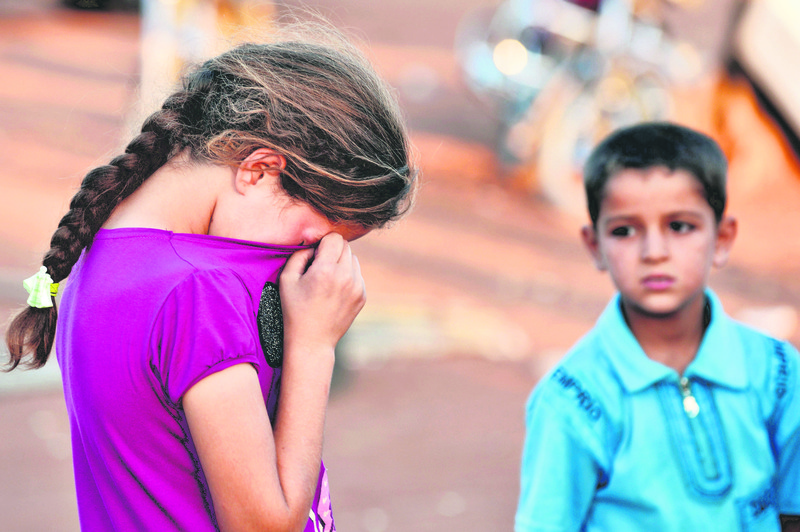 Launched to raise awareness about the suffering refugees endure, Humanity House Museum in Hague simulates the horrors refugees face after they flee their homes and try to reach Europe

With a hastily abandoned suitcase, an overturned wine glass and a radio blaring a warning "to leave now," a unique museum is giving Dutch students a scarily real glimpse of life as a refugee. In a school outing with a difference, teenagers Amy and Sona visited the museum in The Hague, opened in 2010 by the Dutch Red Cross to raise awareness of the work of organizations helping those fleeing war, poverty and despair.

Only moments into their tour of Humanity House, the girls, both 16, were issued a "visa" allowing them to start their journey toward the security of zone B. And even though this was a scripted trip, both had a few heart-stopping moments as they symbolically traced the steps of hundreds of thousands of people who leave their lives behind to make the perilous journey to Europe's shores. After setting off, "the trip becomes a journey into the unknown, where they have to confront several dangers and uncertainties," said Lisette Mattaar, the museum's director. "They have to make difficult choices to reach a safe country."

The museum, dubbed the only one of its kind in the world, welcomed some 30,000 visitors in 2014 compared with 14,000 when it first opened. But with migrants now arriving daily in Europe, interest in the refugee issue and demand for tours has grown. But careful - the experience is said to be so realistic, parents are warned it is not suitable for children under 10. "Schoolkids are bombarded with images and information about refugees, migration and asylum policies without often having all the right context," said Audrey Mussoni, who speaks to the children after the tour. "They hear a lot of figures, but don't know how to put them into perspective, and none of this information is given a human face," she added. "With this trip, we hope to instill some empathy so they learn to think about these issues for themselves." Running out of the first area set up as a house, the two girls found themselves in a labyrinth of dark corridors echoing with the sounds of barking dogs and the strident shouts of policemen. A sign hanging on a door asked: "Choose! Your possessions or your life?" Images of the horrors and woes of the refugees' long march to Europe played across the walls, filmed by researchers among real people. "It's always the little things that strike home the most," said Mattaar.

After filling out piles of paperwork in the hope that they may one day be reunited with their families, Amy and Sona arrived at the border area to be greeted by brusque guards. "Where's your visa for zone B? What is the address, first name and family name of your friends? What are you going to do in zone B?" The pre-taped voice snapped a series of relentless questions at the teenagers, who became visibly more ill-at-ease with each passing minute. "We hear a lot of stories about what it means to be a refugee and how difficult it is," Sona said. "Even if it's just a little bit, we get an idea of what they are going through."

The experience was even more personal for Sona, as her parents fled Armenia before she was born. But the painful memories of their flight to the Netherlands are never really discussed among her family. Once passed the border control, Amy appeared to regain her composure. "The government says that not many of the refugees can come here, and I understand that. But there are also people who really need a lot of help," she said.

Education is key, museum officials say, in a country where the anti-immigrant parties such as the Freedom Party of Geert Wilders are gaining ground as the debate over the migrant crisis polarizes the country. "We get children here saying the refugees are coming to use our taxes, to benefit from our system ... but often it's based on information that doesn't tell the whole story," Mussoni said. For Amy, Sona and their classmates, the 45-minute visit was a positive experience, giving them a better understanding of what refugees confront. They have to "deal with all kinds of emotions," Amy said. "Sadness at leaving everything behind, anguish over the journey ahead, hope for the future and the happiness they are searching for."
RELATED TOPICS