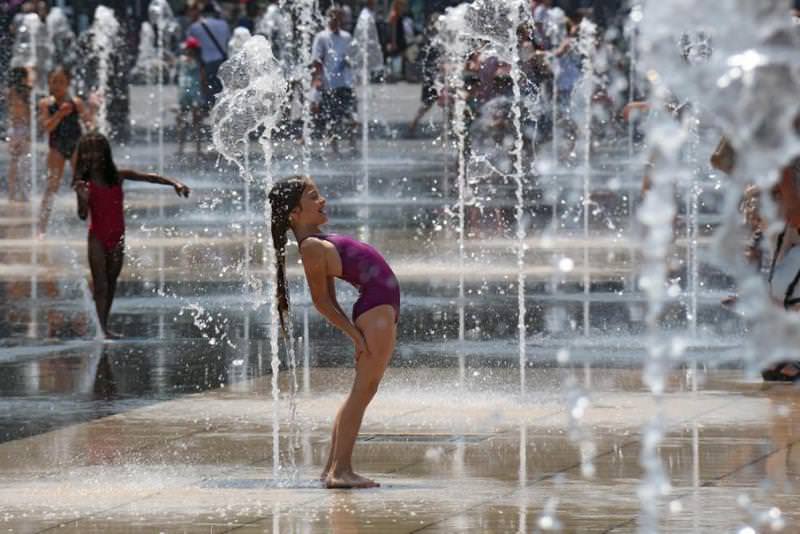 | AFP Photo
by Dec 18, 2015 12:00 am
The globe shattered yet another heat record in November, continuing a warming trend that is all but certain to make 2015 the hottest in modern history, US government scientists said Thursday.

Last month was the warmest November in 136 years and marked seven months in a row of record-breaking temperatures, said the National Oceanic and Atmospheric Administration (NOAA) in its monthly climate report.

The November temperature across global land and ocean surfaces was 1.75 degrees Fahrenheit (0.97 degrees Celsius) above the 20th century average.

Nine months this year have broken heat records, including the last seven in a row.

The "first 11 months of 2015 were the warmest such period on record across the world's land and ocean surfaces," it said.

That means 2015 is poised to overtake 2014 as the most scorching year in contemporary times.

"Most of the globe is covered in record warmth," said Jake Crouch, climate scientist at NOAA's National Centers for Environmental Information.

"At this point we're virtually certain that 2015 will be the warmest year on record," he told reporters.

The only way for 2015 not to set new records would be if December were unusually cold -- 0.43 degrees Fahrenheit (.24 Celsius) colder than the coldest December on record, which came in 1916.

Scientists say the trend is likely a result of human-driven climate change, whereby the burning of fossil fuels spews greenhouses gases into the atmosphere and traps heat.

Crouch also said the El Nino weather phenomenon, which is particularly strong this season, may be playing a role in the unusually high temperatures.

"We do expect the trend of upward temperatures to continue in the short and medium term," he said.

"The El Nino is marked by a very large area of very warm sea surface temperatures in the equatorial Pacific, which tends to boost global temperatures, so El Nino years tend to be warmer than non El Nino years," he added.

The NOAA report said record warmth was notable across most of equatorial and northeastern South America and parts of southeastern Asia.

Japan was wetter than average last month, and Europe experienced its warmest November since 1910.

Cooler than average temperatures were observed in November in parts of the western United States, southern Greenland, northern Asia, and southern South America.