New ‘Michelin guide' for the homeless hits streets of Rome 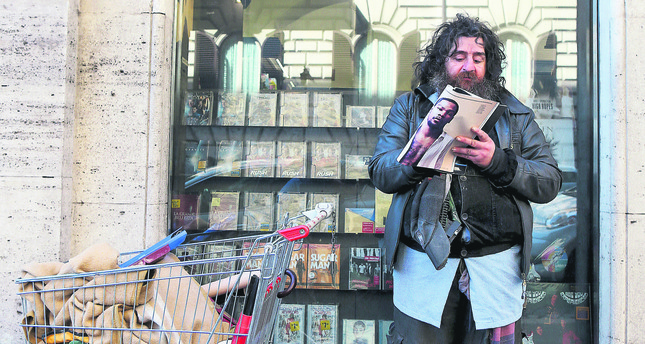 by Dec 24, 2015 12:00 am
It's a guidebook with nothing about the eternal city's ancient monuments or famed restaurants and it can't be found in any bookstore. Its target audience is those who can't buy even a used paperback - the homeless. The 250-page pocket book, called "Rome - where to eat, sleep and have a wash," has been dubbed the "Michelin guide for the destitute". The new edition was presented on Tuesday to draw attention to the homeless during the Christmas season.

The Sant' Egidio Community, a Catholic charity that distributes the guide, estimates that there are about 8,000 homeless people in Rome. Many are foreigners but a growing number are Italians.

About 2,500 sleep outdoors and thousands of others in precarious shelters such as abandoned buildings. Marco Impagliazzo, head of the worldwide group of non-clerics, said a growing number were Italian men in their mid-30s who were separated or divorced and had none of the family safety nets that traditionally protected Italians in the past. Italy's economy is emerging only slowly from a three-year recession and unemployment remains close to record highs, with virtually no jobs growth this year among those under the age of 35.

The guide includes addresses of medical services, 40 sidewalk soup kitchens, 40 indoor eateries, 45 places to sleep and 17 places to wash, get a shave or a haircut. The number of places to wash has increased in recent years in Rome after the homeless themselves told charity workers that was what was lacking most. Pope Francis ordered showers for the homeless to be opened just off St. Peter's Square this year. The guide, now in its 26th edition, includes a pull-out waterproof map with simple drawings - such as a sandwich for food points - and public transport routes to get to them. Sant' Egidio, which has been nominated for the Nobel Peace Prize for its conflict resolution work and AIDS programmes in Africa, plans to distribute 13,000 copies directly to the homeless and to volunteers who help them.