A cup of Turkish coffee, remembered for 40 years 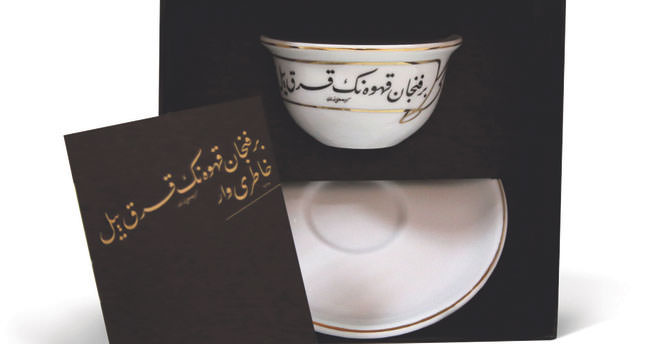 by Zeynep Esra İstanbullu Jan 01, 2016 12:00 am
Kültür A.Ş., the cultural enterprise of the Istanbul Metropolitan Municipality, engraved the phrase "A cup of Turkish coffee, remembered for 40 years" on a Turkish coffee cup to pass down the 19th century Ottoman tradition to the present and emphasize the importance of coffee in Turkish culture.

Kültür A.Ş.'s souvenir brand Hediyem Istanbul reproduced the cup, which was first used 150 years ago at Yıldız Palace. The original cup, which is registered to the Istanbul Metropolitan Municipality City Museum, features the Turkish phrase "A cup of Turkish coffee, remembered for 40 years," just like the replicas produced by Hediyem Istanbul. The writing, in Ottoman language on the original cup, was engraved by calligraphist Mustafa Parıldar. Different from the traditional coffee cup form, the cup showcased at City Museum does not have a handle similar to the cups in Central Asian culture. As the legend goes, the phrase "A cup of Turkish coffee, remembered for 40 years" came into being when a coffee seller in Üsküdar served a cup of coffee to a Greek captain. More than 40 years went by and the coffee seller was captured as a prisoner of war. The Greek captain saw the new prisoner of war, recognized the coffee seller who served him a cup of coffee 40 years before and helped him.

In 1517, Özdemir Pasha, the governor of Yemen, brought the coffee he loved to Istanbul. With a new cooking style created by the Turks, the coffee began to be known as Turkish coffee. The first coffeehouse in Istanbul was opened in Tahtakale in what is now the city's Eminönü district, and soon coffee houses spread across Istanbul. The coffee houses, where people read books and shared writing, played chess and talked about literature and poems, left its mark on the social and cultural life of Istanbul in the 19th century. Turkish coffee was served with a glass of water and a sweet dessert, such as marmalade or Turkish delight. The water was used to clean the palate before having a sip of the coffee to maximize its taste. As people did not use sugar, Turkish delight or marmalade were used to sweeten the taste of the coffee. Finding a place for itself in the palace kitchen as well as houses around the city, the coffee was served with great care to guests. Over a very short time, Turkish coffee and its exquisite taste conquered Europe and the rest of the world via tradesmen, wanderers and Ottoman ambassadors.
RELATED TOPICS