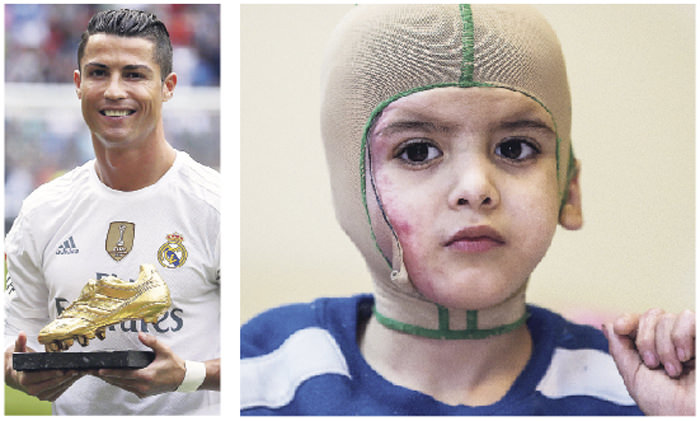 On July 31, Israeli settlers set the Dawabsheh family's home on fire in the West Bank town of Duma. The attack claimed the lives of Ahmad's parents and his 18-month-old baby brother Ali. The fatal event caused widespread anger that many analysts believe was the source of the heightened ongoing violence in Palestine and Israel. Ahmad's grandfather, Hussien Dawabsheh, told Anadolu Agency that Ahmad was thrilled to receive an invitation to visit Real Madrid.

"Ahmad supports Real Madrid and he always wants to wear Cristiano Ronaldo's number seven shirt," Dawabsheh said. "Once, they brought him a football with Barcelona's slogan, but he immediately painted it white."

Ahmad's family said he may be able to temporarily check out of the hospital in March to visit Spain, but will return to complete his treatment. Ahmed suffers from brutal burns that have severely affected his mobility. The Palestinian embassy in Madrid confirmed that Real Madrid has accepted its request for Ahmad to meet Ronaldo. "Ahmad is one of the victims of the Israeli occupation and represents thousands of Palestinian children who were burned or killed by the occupation," Marwan al-Burini, a senior adviser at the embassy, told Anadolu Agency. "I will be in the stadium shouting 'Hala Madrid,' not in the hospital," Ahmad said. "That sounds like an adventure." "But you promise he is the same Cristiano Ronaldo on TV?"
RELATED TOPICS