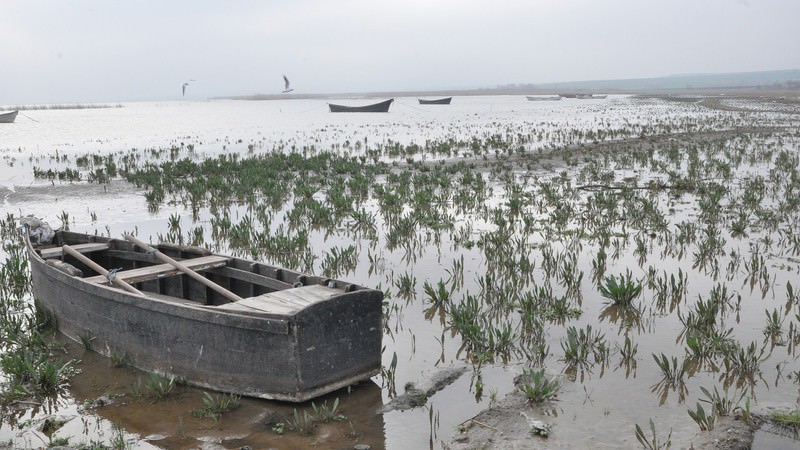 by Daily Sabah with IHA Feb 23, 2016 12:00 am
Manyas Lake, situated in the Bandırma region of western Turkey, is an important habitat and breeding site for water birds which is on the brink of disappearance, if adjustments are not made soon. Environmentalists say that the lake is highly polluted, mostly due to waste from factories.

Osman Tok, a fisherman earning his living from Manyas Lake, said, "Factory runoff and garbage have polluted the lake." Between 10 to 15 tons of fish were caught there annually only six or seven years ago, but only 20 to 30 kilos are caught now. "Fishing is on the brink of extinction here. Sixty boats set off for fishing, but they return empty-handed. The number of fish has decreased due to pollution," Tok said. Gültekin Mutlu, the president of GÜMÇED's (Southern Marmara Natural and Cultural Life Protection Association) Bandırma branch, said pollution has increased since 2000 and threatens the population of lakefish and waterbirds.

"Not just the factory runoff from within the Bandırma region, but the sewage from nearby buildings and houses worsens the situation. We are urging factories to establish treatment facilities, or use the available ones. Agricultural activities carried out around the lake must be controlled," Mutlu said. Described as "bird paradise," Manyas Lake is internationally protected and home to hundreds of bird species, including the Dalmatian pelican, cormorant, flamingos and heron, as well as fish varieties such as carp, catfish and pike fish.
RELATED TOPICS