Imam loses leg to bomb, but not his faith in Syria 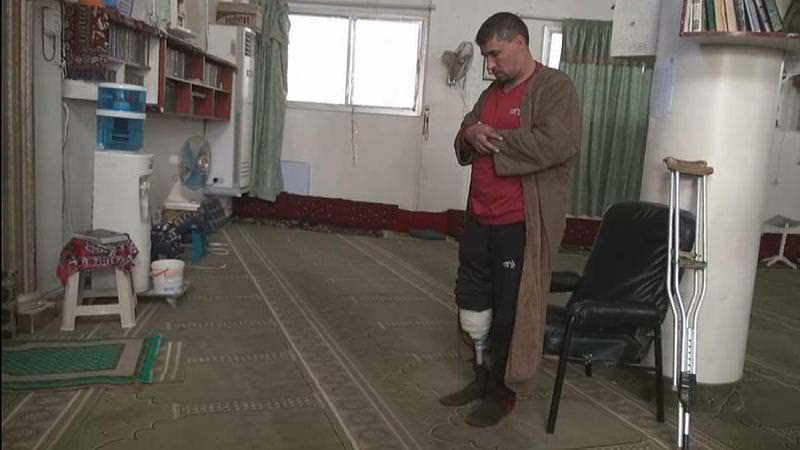 'Life must go on even during war,' says cleric of mosque in Syria's Daraa province, who continues to lead prayers despite him losing his leg in mortar attack

Despite the fact that a mortar bomb ripped his right leg away, a cleric at a mosque inside a Palestinian camp in the southwestern Syrian province of Daraa does not allow his injury get the better of him and stop him from performing his religious duty every day in the war-torn country.

When Anadolu Agency asked Imam Imad Mutlaq Monday why he continued to go to lead the prayers at the camp's Al-Quds Mosque, which has been bombed by the Assad regime at least three times so far this year, he replied: "Life must go on even during war".

Mutlaq, who is a father of two young children and now uses a prosthetic leg to visit the mosque, recalled how he ended up losing his leg.

"I was injured while I was leaving the mosque six months ago. Pieces of shrapnel infected my [right] leg and it was cut off [from below the knee joint] at a mobile hospital," he said.

Mutlaq said he would continue to lead the prayers at the Al-Quds Mosque, even if there was a threat of it getting bombed again. In fact, he said, he returned to his duties as soon as he got healthy again.

There was a time when the camp was filled with 30,000 people before the civil war, he recalled, which in turn saw many people answering the call of prayer at the mosque. However, now hardly 300 people, including women and children live at the camp. At the time when Mutlaq was filmed for Anadolu Agency, only two other people apart from him were in attendance during the prayers.

People have stopped going to the mosque because of that fact it had been bombed three times in 2015 alone, he said.