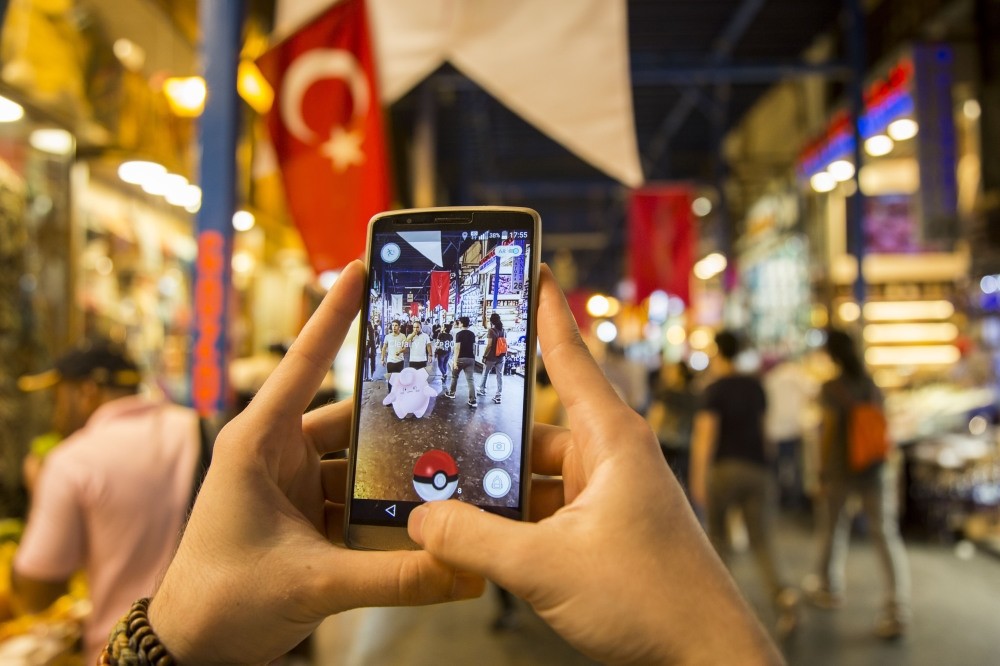 by daily sabah Jul 15, 2016 12:00 am
The new mobile game "Pokemon Go" has become a sensation around the world, and in Turkey the phenomenon is not much different. Passersby in Ankara have been seeing hundreds of game players in the city's Güven Park who gather there to capture Pokemons in the evening hours. The group gathers through social media and draws curious stares from onlookers.

Another interesting practice is in the central Eskişehir province, as a local youth center offers free water and tea to those who come to the center to find a Pokemon. The game also attracts students and some have even lost weight while trying to catch one. Kazım Timişkan, an engineering student at Trakya University in Edirne, said students walk several kilometers sometimes in pursuit of the characters. "I have lost four kilograms of weight after I covered 30 kilometers in four days to find a Pokemon. Game users continuously interact with each other and I think the game has a social aspect to it," he said.

According to Turkish daily Habertürk, a special event called "Pokemon Avı Buluşması" (Pokemon Catch Meeting) will be held on the Caddebostan coast on the city's Asian side from 5 p.m. to 2 a.m. this weekend. Publicized on Facebook, the meeting calls all Pokemon fans, saying, "We not only catch Pokemons, we have a chat and socialize with each other." Around 3,000 Pokemon Go fans are expected to attend the event.

On Facebook, the Health Ministry shared a warning telling people to avoid going out when the sun's rays is at their strongest. A user then asked how they could go out to catch Pokemon, which ministerial officials responded to, saying: "We do not recommend searching for Pokemon from 11 a.m. to 4 p.m. Please do not look at your phone while crossing the street, either."The "augmented reality" game based on the 1990s Japanese franchise surged to the top of Apple Inc's app charts over the weekend. Gamers use their mobile devices to find and capture virtual Pokemon characters such as cuddly yellow Pikachu at various real-life locations. Developed by Pokemon Company International, Niantic Inc. and Nintendo Co. Ltd, the game uses the GPS mapping and camera systems on players' devices.

Five days after its release, the game now is on more Android phones than dating app Tinder, and its rate of daily active users was neck and neck with social network Twitter, according to analytics firm SimilarWeb.

Nintendo shares up more than 50 pct since 'Pokemon Go' release

Shares in the Japanese company Nintendo have seen a stellar rise since the release of their augmented reality game "Pokemon Go," gaining more than 50 percent. Shares shot up 16 percent on Thursday, making an overall increase of 56 percent since trading closed on Friday - the day the game became available. It topped the app stores' download chart on both iPhone's App Store and Google Play just days after its initial release in the U.S., Australia and New Zealand. Nintendo shares had already started the week with a 25 percent jump on Monday alone.