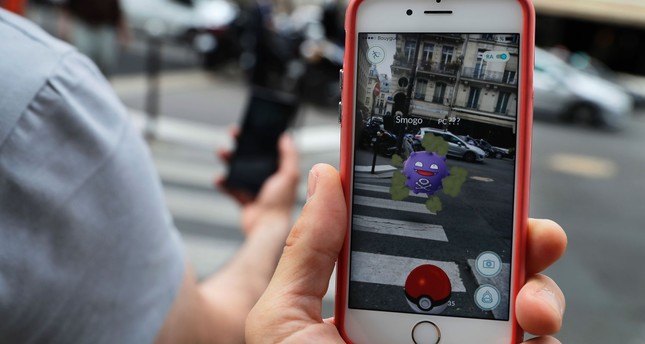 This picture taken on July 26, 2016 near the Louvre museum's pyramide in Paris shows the 'Pokemon Go' app on the screen of a smartphone. (AFP Photo)

Three teenagers playing the hit game Pokemon GO have been robbed at gunpoint in a north London park and forced to hand over their mobile phones, British police said on Saturday.

Armed robberies are rare in Britain and police said they were hunting three suspects thought to be aged around 16 or 17 in relation to the incident on Tuesday evening.

The game has already been blamed for a rash of accidents and a slew of mishaps stemming from distracted players.

The app, created by mobile game developer Niantic for Nintendo Co Ltd, is upending the world of gaming, getting players off the couch and walking outside to play. Staring at their phone screens, they search for virtual Pokemon characters that appear to pop up at office spaces, restaurants, museums and other places. Players score points in various ways, including capturing the Pokemon characters with a flick of a finger on their phone screen. The game was the most downloaded free app on Apple's app store, and Nintendo shares surged nearly 25 percent on Monday.

Across the United States, players have been drawn down dark alleys and into dangerous neighborhoods in search of the imaginary creatures, only to be targeted by criminals.

In College Park, Maryland, university students holding their smartphones out to play Pokemon Go were robbed on Tuesday night by an armed suspect, police said. In Antelope, California, two men playing the game in a park late on Sunday reported being robbed and carjacked by a gunman.

Fireworks were thrown from an SUV at a group playing the game after midnight on Monday on the streets of Boca Raton, Florida, police there said. No injuries were reported.

And in Wyoming, a 19-year-old woman who set out to catch a Pokemon by the Big Wind River on Friday instead found a dead body.

The game was also to blame for a rash of car accidents in the United States. An illegally parked car whose driver had exited to catch a Pokemon was struck from behind, according to reports from Texas A&M University police, and another car struck a tree while its driver was playing the game while driving, Auburn New York police said.