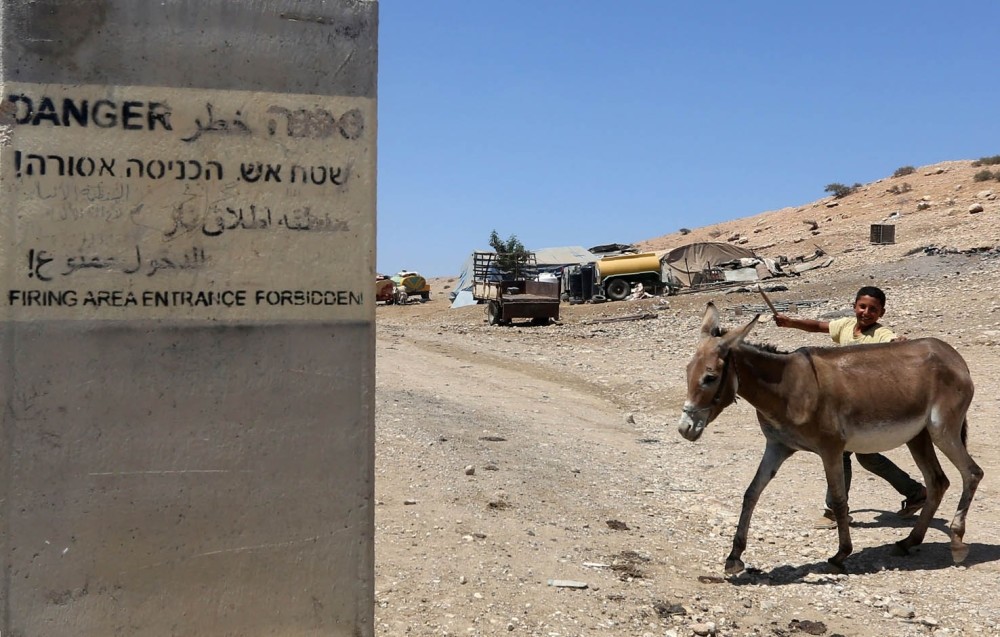 by Aug 04, 2016 12:00 am
"Forty donkeys for sale," reads a notice in Palestinian newspapers. Nothing out of the ordinary about that, except that the seller is the Israeli army.

Palestinians say the army is trying to sell back animals which they seized from Palestinians living in the Jordan Valley in the occupied West Bank.

Israeli authorities say they regularly round up wandering livestock in the interests of public safety, especially to reduce road accidents.

Palestinians see a policy of confiscations and demolitions which are aimed at pushing them out of the valley, which runs along the border with Jordan.

The valley has valuable water resources and farmland and is seen by Israel as vital to its strategic defense.

The donkeys will be auctioned off if unclaimed by their owners, the Arabic-language text of the ad announced, but reclaiming their property will be costly.

Arif Daraghmeh, head of a council of 26 hamlets in the valley's Al-Maleh district, said they have to pay fines of up to 2,000 shekels ($526) for each donkey.

Since the army has been rounding unsupervised animals, it claims "road accidents have fallen by 90 percent," explaining that the fines are levied to cover the costs of catching and looking after the donkeys.

The public offer to sell 40 head is unusual, said Daraghmeh, only the third in the past two years, before which there were none.

But confiscations, he said, are nothing new.

Sixty-year-old Sliman Besharat said his goats, housed under a shelter of sacking, have in the past been quarantined by Israel. Like Daraghmeh, Besharat sees a strategic aim behind the seizures. "By confiscating animals and agricultural equipment and demolishing houses, animal shelters and other structures, the Israelis are putting pressure on the Palestinians to leave the Jordan Valley," which makes up a third of the West Bank.

"Whoever controls the valley controls the border (with Jordan) and access to water and farmland," resources which are vital for local Palestinians, who depend on agriculture and livestock.

This is true for Yusef, who watches over his 80 cows and their calves while keeping one eye on the road used by Israeli military vehicles. Behind him a sign on a concrete block warns in Hebrew, Arabic and English: "Firing zone, entry forbidden."

The Israeli army has turned 18 percent of the West Bank into training grounds, according to United Nations data. Nevertheless, 6,200 Palestinians still live in such areas.

In the Tubas area where Yusef lives, more than 800 people remain with their cattle on land that Israel has designated as firing ranges. The army, he said, can expel them and seize their livestock at any time.

"The soldiers load them on trucks and tell us that we're in a closed military zone," he said, brandishing a stick to move his emaciated animals.

"Or they come through in their tanks and nothing survives, not a concealed bird's egg or a baby gazelle lying on the ground."

Yusef said he has in the past lost dozens of animals, confiscated or dead from thirst through lack of access to water.

The U.N. says the vast majority of Palestinian residents are not connected to water and must buy it at great expense, despite being just a short distance from the banks of the River Jordan. About 90 percent of the valley lies in the West Bank zone known as "Area C," which is under full Israeli control. It is "virtually prohibited for use by Palestinians and reserved for the Israeli army or placed under the jurisdiction of the settlements," where 9,500 Israelis live and farm. Water consumption in some places is a mere "20 litres a day, one fifth of WHO (World Health Organisation) recommendations."

On the rocky hillside that rises behind Yusef's cows, he said a pipeline running to a settlement carries water which animals were once free to drink.

"Before we drank the water at its source," Yusef said. "Now the settlers bathe in it."
RELATED TOPICS