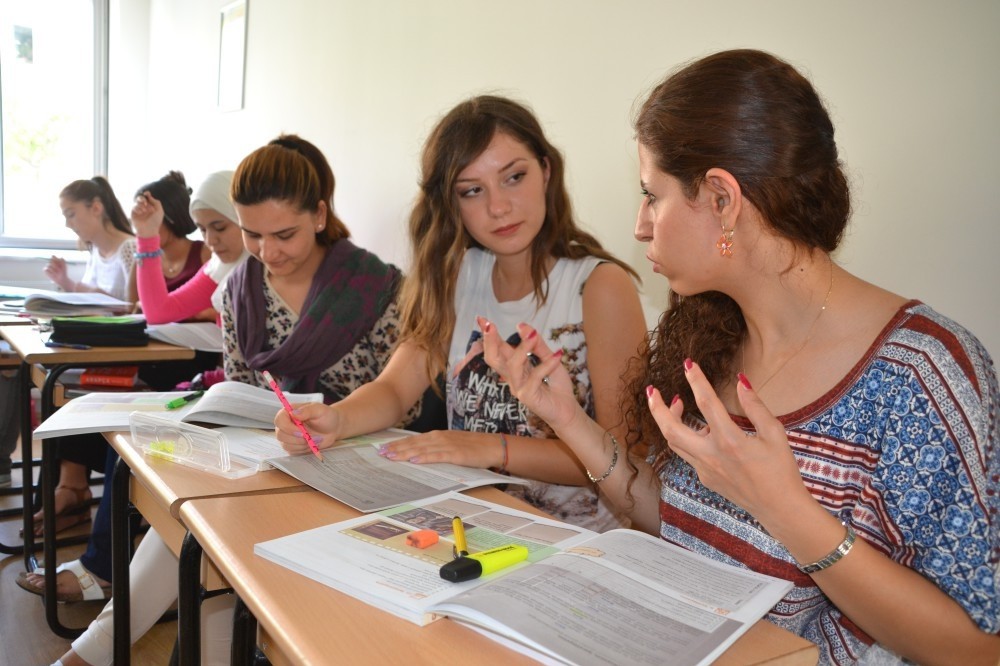 A group of international students at Su00fcleyman Demirel University.
by Compiled from Wire Services Aug 08, 2016 12:00 am
Yunus Emre Institute, which launches international projects to promote Turkish language and culture, brought 540 students from 46 countries to Turkey for a Turkish summer school.

As part of the project still ongoing at 20 universities in 16 cities across the country, students also enrolled in cultural programs until Aug. 27. Süleyman Demirel University in the province of Isparta is host to some of these visiting students for one month. Coming from Afghanistan, Austria, Bosnia and Herzegovina, Romania, Palestine and Jordan, students are attending language and cultural courses. "These students show their support to Turkey by visiting our country despite our recently declared state of emergency," Selami Turan of Süleyman Demirel University said. One of the participants, Aya Zrikat, a Jordanian dentist, said, "When I came to Turkey, I realized that Turkish and Jordanian people share cultural similarities. I am happy to study Turkish culture and language here." Journalist Melisa Louikeh comes from Lebanon. "A coup attempt recently happened in Turkey but I did not cancel my plans to attend. I am very interested in the Turkish language," Louikeh said. Özlem Gezici, a Turkish-Romanian, also came to Turkey to develop her Turkish skills.The Yunus Emre Institute works in collaboration with more than 80 universities in China, Japan, Belgium, Malaysia and Lebanon, to establish a Turkish language department at these universities or simply offering courses in Turkish as a foreign language.As the institute does every year, hundreds of students chosen from thousands of Turkish trainees around the world are hosted in Turkey, where they learn about Anatolian culture and develop their Turkish abilities. Upon completion of the program, the students will participate in a Turkish bayram celebration in Istanbul, which will be organized by the institute.

President Şeref Ateş of the institute said that they are continuing to work diligently to promote Anatolian culture. Ateş said that the institute began its works in the Balkans initially but they now operate in Europe, East Asian countries, the Americas and Africa as well. "Turkish language continues to be a mainstream language and a language of science. We are at work to establish a Turkish language preparatory class for medical training in Sudan and Somalia which will be taught entirely in Turkish. We have signed the necessary protocols and assigned our instructors. Beginning in the 2016-2017 academic year, certain hospitals in Sudan and Somalia will begin to offer medical training to students in Turkish."
RELATED TOPICS