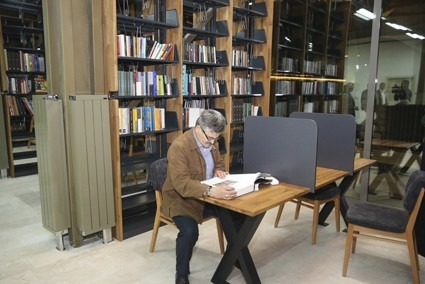 by Aug 16, 2016 12:00 am
Istanbul's Zeytinburnu Municipality has initiated an important project at the Zeytinburnu's Merkezefendi City Library, offering free tea, coffee and soup to those who come to the library to read or study.

If visitors want, library workers serve their beverage or soup at their table. The project, which began in June, aims to encourage residents of the district to read as well as to increase awareness of libraries. The city library in Zeytinburnu, whose official opening will take place at the end of the year, is expected to house roughly 50,000 books. Besides contemporary fiction and non-fiction, the library will include reference books.

Commenting on the project, Zeytinburnu Mayor Murat Aydın said: "Most who come to our library are students. We were all students once, and we are aware that a student's budget is stretched by a couple of liras, because most are dependent on financial help from their families to continue their academic studies. We created this project to support students, encourage reading habits and spread the culture of libraries in the district."
RELATED TOPICS