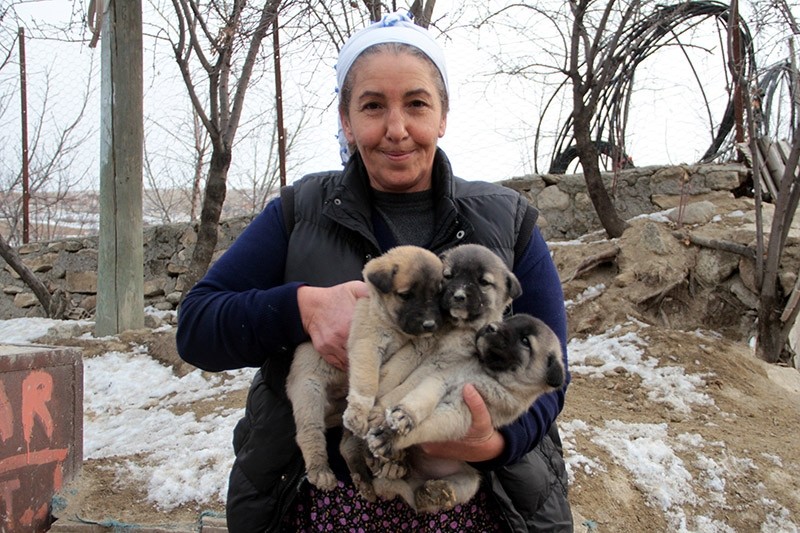 A woman's call on social media for nine puppies having trouble in finding food amid harsh winter conditions in a village in eastern Turkey has not been left unanswered by animal lovers.

At the end of December, a dog named 'Gümüş' gave birth to a litter of nine pups in the Denizli village located in Elazığ province in eastern Anatolia, a region famous for its freezing winter. Gümüş could not produce enough milk for her litter and the puppies seemed likely to starve, so villagers took to social media to ask for help.

52-year-old Ruhiser Yıldırım was one of the villagers who asked for help on behalf of the puppies.

Many animal lovers saw Yıldırım's call for food, and mailed packages of dog chow for the hungry canines. The puppy-loving philanthropists, mostly from Istanbul, Ankara, and Bursa sent a total of about one ton of dog food to the village so that the pups could spend the cold winter nights with full bellies.

Yıldırım explained that only a few families stayed during the winter months in the village of about 100 households.

It was a surprise that Gümüş gave birth to a litter of nine puppies, and a bigger shock that she stopped producing milk. As Gümüş could not produce enough milk for the whole litter, one of the puppies died of starvation.

After the death of the puppy, Yıldırım launched a social media campaign for the remaining pups.

"Our dog had nine puppies. One of them died from starvation when the mother couldn't give it milk," she explained. "I decided to launch a charity campaign. Kind-hearted citizens began sending food by mail. There are still people who want to donate and call me or send me food," he continued.

Yıldırım did not anticipate that his call for help on social media would yield so much food. "We give the extra food to other animals in neighboring villages," she said.

"May God bless our kind-hearted citizens who continue to send food. We give it to cats, dogs, every animal in neighboring villages, to make sure that no animal goes hungry," he added.