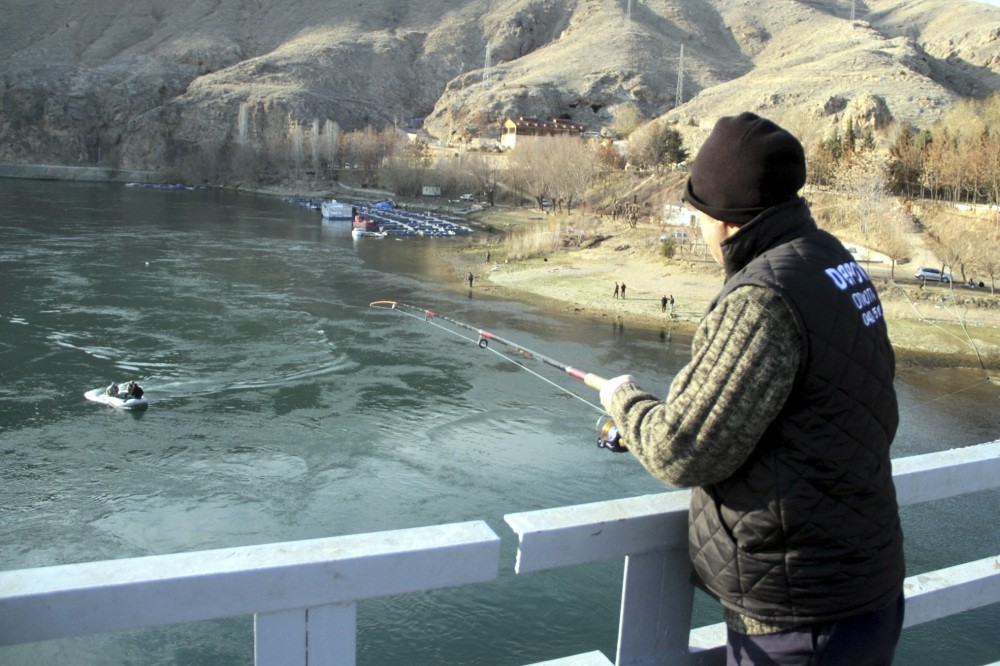 by Anadolu Agency Feb 23, 2017 12:00 am
Situated in the uppermost Euphrates valley in the eastern Anatolian city of Elazığ, the Keban Bridge, which crosses the Euphrates River, is reminiscent of Istanbul's own Galata Bridge, with fishermen casting their lines all day long in hopes of catching some of the best fish in the region. Draped across a stunning landscape, the Keban Bridge is one of Turkey's most well kept secrets, hosting local fishermen and amateurs seeking a memorable experience in an area rich with aqua-cultural resources. Casting their lines in seamless rhythm, the fishermen who dwell on the bridge hope to catch salmon, cyprinus and garfish, while the bridge becomes especially crowded on the weekends.

One of these local fishermen spoke with an Anadolu Agency (AA) correspondent said that he has been fishing on different parts of the Euphrates River for years -- mostly as a hobby -- adding that he especially enjoys fishing on the Keban Bridge. Osman İlhami claimed that the fish near the bridge have an especially delicious taste attributable to the extremely cold water released from the turbines of the hydroelectric power plant located immediately adjacent to the bridge. The local fisherman said, "The Keban Bridge is the first choice of fishermen in the region, not only for the delicious fish, but also for the friendly atmosphere among the fishermen."

İlhami went on to say that he looks forward to coming to the bridge to fish, asserting: "We not only come here to fish but also to socialize and have a good time. We drink tea and enjoy having picnics. Undoubtedly, our happiness increases twofold when we catch fish as well."

According to İrfan Tökü, another fishermen who comes to the bridge, he has been fishing here for the last five years and the joy he gets from fishing on the Keban Bridge has no comparison. He said that people from neighboring provinces come to the Keban Bridge to fish and spoke of the clean atmosphere: "The air in this region is clean. This is a place families like to visit. There are picnic areas for families here, and the fishing experience on the Keban Bridge is like that on the Galata Bridge in Istanbul. Here, you can have an incredible time and have fun with your family."

One of the fishermen, Mehmet Torgut advised those who visit Elazığ and want to have a good time to come to the Keban Bridge to fish.
Last Update: Feb 23, 2017 1:30 am
RELATED TOPICS