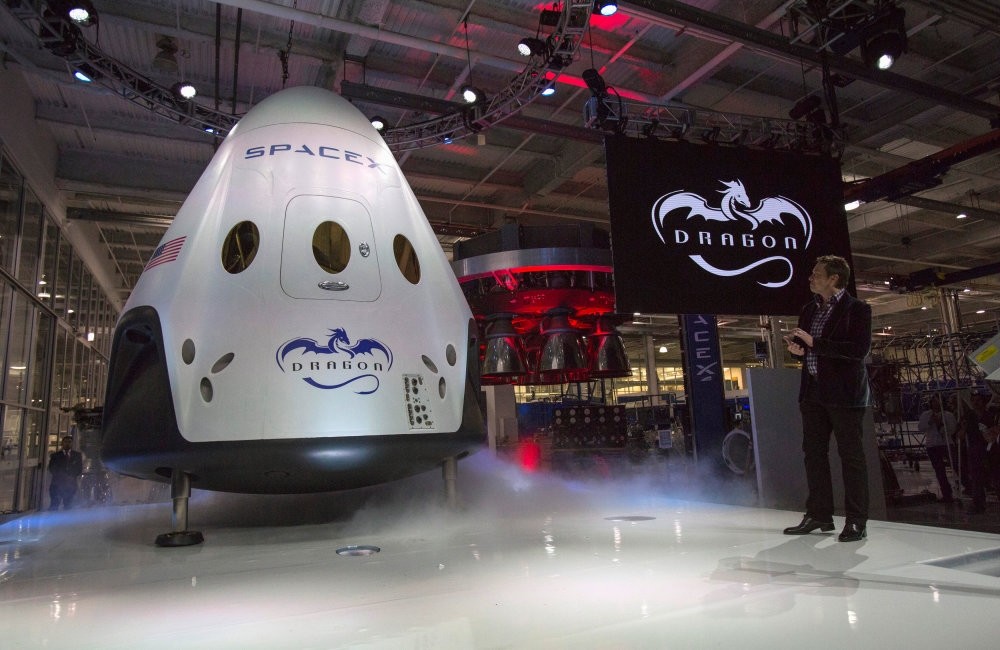 SpaceX CEO Elon Musk unveils the Dragon V2 spacecraft in California.
by Anadolu Agency Mar 01, 2017 12:00 am
SpaceX will send two history-making passengers on a trip around the moon next year in its Dragon 2 spacecraft, company Chief Executive Elon Musk announced Monday."Fly me to the moon...Ok," Musk tweeted alongside the announcement, quoting the song Frank Sinatra made famous.

Two unidentified individuals approached Musk with the plan for the first private trip to the moon and the pair have already paid an undisclosed sum as a deposit. Because the Dragon 2 spacecraft is controlled by a crew on Earth, there will be no specially trained astronauts on board during the weeklong trip beyond the two passengers.

The passengers will tour the moon in one long loop and pass near the lunar surface, but will not land. "It would skim the surface of the moon," Musk said.

The Dragon spacecraft, which launches using the SpaceX Falcon 9 rocket, has been used several times to deliver cargo to the International Space Station (ISS).

Although it is designed for manned missions, the company has not attempted any such flights. That will change in the second quarter of 2018, SpaceX said, when the company sends a crew to the ISS.

SpaceX will then blast off with the two lunar tourists late next year, Musk estimated. "Once operational Crew Dragon missions are underway for NASA, SpaceX will launch the private mission on a journey to circumnavigate the moon and return to Earth," the company said in a statement.

"Lift-off will be from Kennedy Space Center's historic Pad 39A near Cape Canaveral - the same launch pad used by the Apollo program for its lunar missions. This presents an opportunity for humans to return to deep space for the first time in 45 years and they will travel faster and further into the Solar System than any before them," it added.
RELATED TOPICS