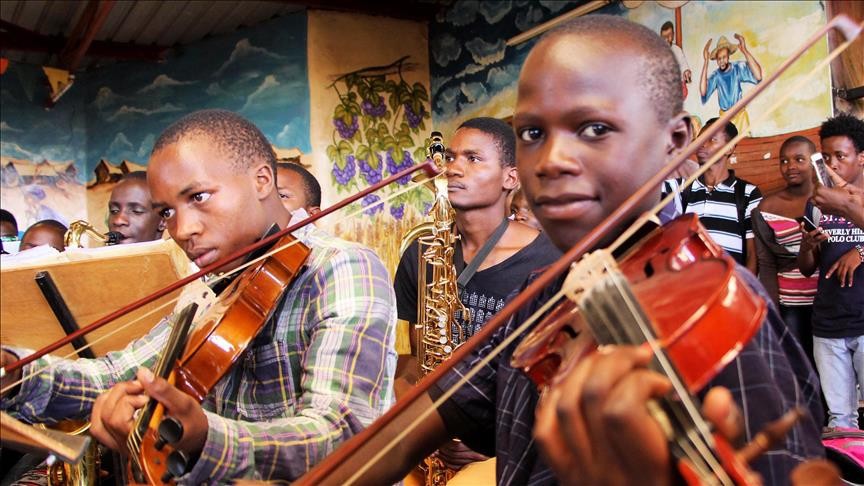 by Anadolu Agency Apr 04, 2017 12:00 am
The United Nations Development Program (UNDP) officials along with a Kenyan Afro-pop band Sauti Sol visited children from the Korogocho slum in the capital Nairobi aiming to fight crime and unemployment by playing music.

A total of 650 children from the slum are now participating in the Ghetto Classics Orchestra.

Elizabeth Njoroge, founder of the orchestra, said the Korogocho slum is ranked among the most dangerous slums in East Africa.

Njoroge said she was tired of seeing children engage in crime due to unemployment and lack of school fees, adding that she started the facility to "give birth to the future Mozarts."

Kenyan local celebrities along with U.N. officials encouraged the young musicians armed with violins, guitars, trumpets, euphoniums, trombones and tubas among other instruments to continue on their journey of music.

Nelson Kimani, aged 15, told Anadolu Agency that he wants to be as famous as Mozart.

"I want a good future for myself and the future generations to come. At home, we are very poor but with my music I will change all that," she said. "I have met celebrities that I look up to, this has really motivated me."

Mohammed Yahya, UNDP's Africa regional program coordinator, said that youth unemployment in Sub-Saharan economies is high and is expected to worsen in the next few years as countries absorb nearly 90 million young people between the ages of 15 and 24 years old into the job market.

As part of its 17 global goals for sustainable development, the U.N. has urged governments to end extreme poverty, unemployment and inequality affecting the young generation in order to save the planet.

"As the African youth population is projected to double by 2050, therefore, achieving the goals is a youth issue," Yahya said.

He said that the youth from Korogosho slums, home to over 350,000 people and classified as the urban poor, need to be given the tools to change their country, which in this case is the art of music that will offer them employment.
RELATED TOPICS