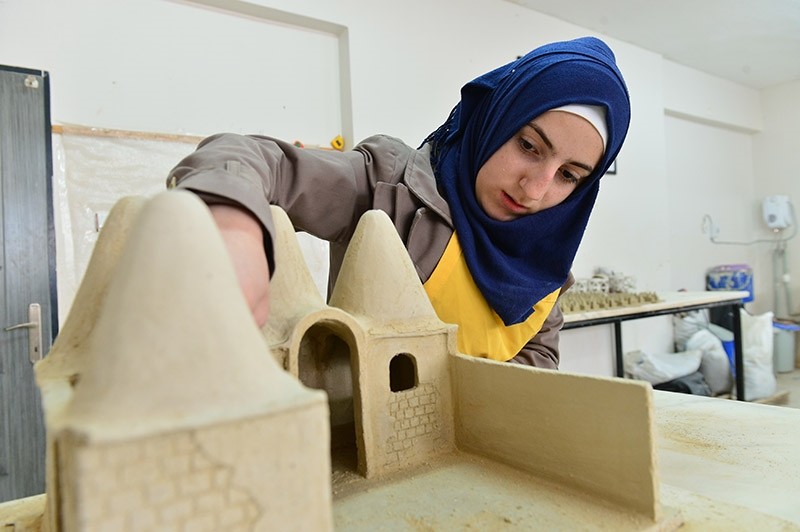 Turkish and Syrian women have come together to create ceramic models of the famous "beehive houses" found in the Harran district of southeastern Turkey's Şanlıurfa province.

The Harran Municipality has been offering ceramics courses to disadvantaged Syrian and Turkish women and girls aged 16 to 45 for about a year at a local family support center. Thus far, some 100 women have enrolled in the ceramics course and have begun to produce trinkets depicting the iconic domed Harran beehive houses that are identified with the town.

The municipality asked the women to produce about 2,000 of the trinkets within the course of a year, an order which has kept them very busy.

Harran District Governor Temel Ayca said that the women are aiding important work related to traditional handicrafts in the district, which is a tourism capital of Turkey.

Ayca told Anadolu Agency that the work was also important in supporting and empowering women seeking asylum from Syria in the district.

Expressing a desire to think locally, Ayca added, "We do not want to sell products in Harran that come from the outside. We want souvenirs sold in Harran to be produced in Harran. Our efforts are ongoing, but we are well on our way. Orders have begun to come, and we are having difficulty meeting the high demand."

One of the trainees, Ayşe Halat, explained that she had been studying ceramics for more than two years.

Expressing that she enjoyed making the houses in such a friendly environment, Halat said, "Now I am making the Harran houses. Through this work, we are trying to introduce Harran to the world."

Halat added that together the women produce between 15 and 20 of the model houses each day.