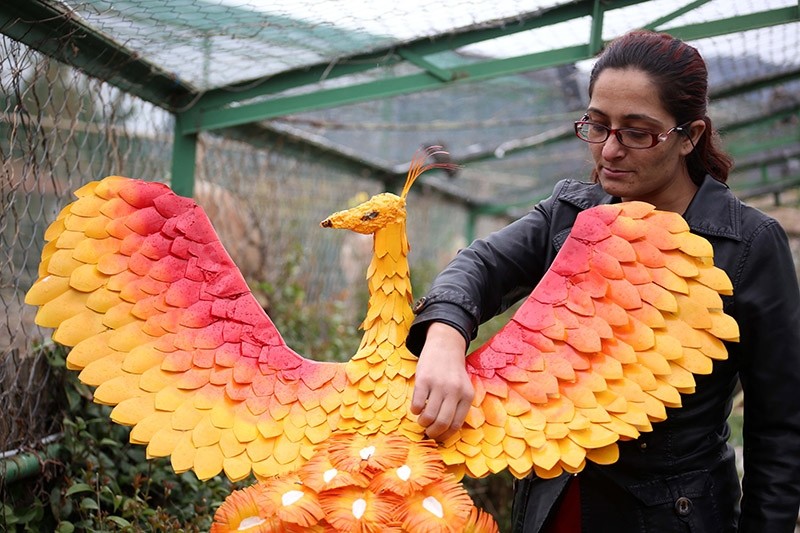 The town of Eğirdir, which is located in Turkey's Mediterranean region of Isparta and is a member of the "Cittaslow" movement, collects waste in a recycling unit located in Rüya Park ("Dream Park") and turns garbage into works of art piece by piece.

The municipality created the recycling unit three years ago, acting under the slogan "Not everything thrown away is waste." Almost every kind of tossed-out item is re-used and "upcycled" to become an object with an everyday use or transformed into a work of art.

Flowerpots are used to make human figures, old tires are turned into animals like roosters, eagles and peacocks, and a large range of items like table napkins, plastic spoons and forks, surplus tree branches and stones are used in addition to the trash.

The unit, which is operated by five individuals, forms part of a recreational area in which the upcycled works of art are exhibited. Landscape architect Aslı Akyol, who is one of the recycle artists, stated that the group had already presented their objects at various fairs and were able to attract a lot of interest.

Eğirdir became Turkey's twelfth "slow city" in January 2017 as part of the Cittaslow movement, which originated in Italy. Ömer Şengöl, the town's mayor, explained to Anadolu Agency that the municipality had previously undertaken efforts to reuse waste by turning it into everyday objects and would now concentrate on becoming even more environmentally friendly. He also called for citizens to deliver re-usable and clean items to the unit for up-cycling.