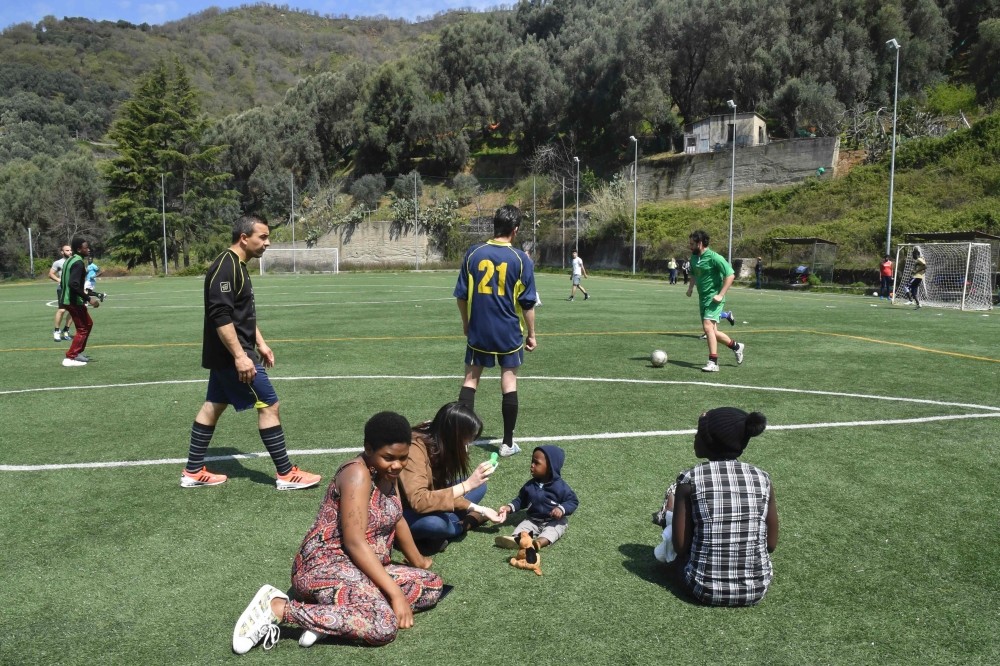 Women migrants Eunice (L) from Nigeria and Hawa (R) from Gambia relax along the pitch as migrants play football with a local team in Santu2019 Alessio in Aspromonte, a small village of 330 inhabitants in Calabria.
by Apr 19, 2017 12:00 am

Having nearly died, the small Italian village Sant'Alessio is now being enlivened by a group of refugees, who have brought back urban life, with social and economic initiatives

In the foothills of the Aspromonte mountains in southern Italy, the silence of a once-dying village is broken by the laughter of a small group of refugees.

Tiny Sant'Alessio has been welcoming families and vulnerable migrants here for three years in a project that not only provides humanitarian assistance but brings with it invaluable economic and social benefits.

Over the years the village has dwindled to only 330 inhabitants, many of them elderly. The steep cobbled streets are deserted and most windows are shuttered, with residents having left over the years for better work opportunities in Turin, Milan or as far away as Australia.

In an attempt to reverse the trend, however, since 2014 the council has been renting eight of these empty flats to house up to 35 migrants at a time as part of the national SPRAR network (Protection System for Asylum Seekers and Refugees).

Everything is done to help the newcomers get back on their feet, from Italian lessons to legal, medical and psychological assistance, vocational training and social activities such as gardening, cooking and dancing classes. 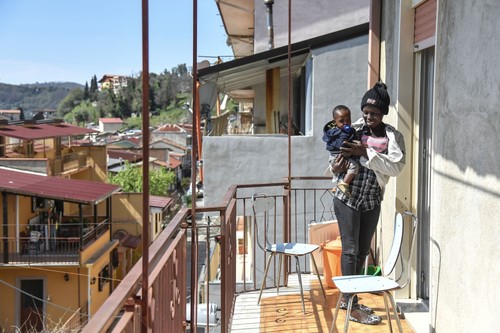 Hawa and her son Lamin, migrants from Gambia, stand on a balcony in Sant' Alessio in Aspromonte, a small village of 330 inhabitants in Calabria, southern Italy.

The village is currently home to an Iraqi Kurdish family, a Gambian couple with a baby and young people from Ghana, Nigeria, Mali and Senegal.

There is a special project for the most vulnerable, including HIV-positive people, diabetics, victims of prostitution networks, a deaf and dumb couple, and a young woman whose toddler son was shot dead in Libya and husband is feared drowned.

"Our mission is both humane and humanitarian, that's the most important thing," said Stefano Calabro, a 43-year-old police officer who has been mayor of Sant'Alessio since 2009.

"But there is a significant economic benefit too."

The state allocates up to 45 euros day for each migrant, most of which goes to the organizers to cover costs.

The project has created full or part-time jobs in Sant'Alessio for 16 people including seven locals - from social workers to Italian teachers and cultural mediators.

And it has prevented the closure of the village's basic services - a bar, small supermarket, doctor's surgery and a pharmacy.

With funds to spend on services, the council has been able to open a small gym open to all residents and upkeep a lush sports field overlooking the valley, where migrants regularly challenge the team from a nearby drug rehabilitation center.

After six months to a year here, some of the refugees managed to find work in the region, others headed elsewhere.

Ghanaian Salifu, 23, decided to stay on and has been living off odd jobs like helping with manual work in the fields.

Sant'Alessio may not offer bright lights or much in the way of career opportunities, but a cheerful Salifu says "we're not going anywhere."

Sitting in the sunshine and watching the world go by from his front garden, 89-year old Antonio Sacca - who spent 54 years working in a Turin factory before returning home - says he likes his new neighbors.

"They behave well. They live independent lives but often lend a helping hand," he said.

Bar owner and widow Celestina Borrello, 73, whose son left years ago to find work in Belgium, says "the village was emptying, so if there's a little movement now, it's a good thing."

"We know what it means to leave our land," she adds.

The project has been such a success that Coopisa, the association behind it, is opening others in four villages nearby.

And there is another benefit: Those that join the SPRAR network and take in small numbers of refugees are guaranteed not to have to host an emergency reception center, such as the one in the nearby ski-town of Gambarie, where 120 migrants are massed in a hotel.

With just 26,000 places available, the network is only a small part of Italy's reception system, which hosts more than 176,000 people.

While most are housed in large groups, often angering or frustrating local communities, this dusty village is seen as a quiet triumph.

"Sant'Alessio has been our prototype," said Coopisa head Luigi De Filippis, who points out there is scope for the project to go across Italy and beyond.

"There are vast areas affected by the same depopulation in northern Italy and elsewhere in Europe."