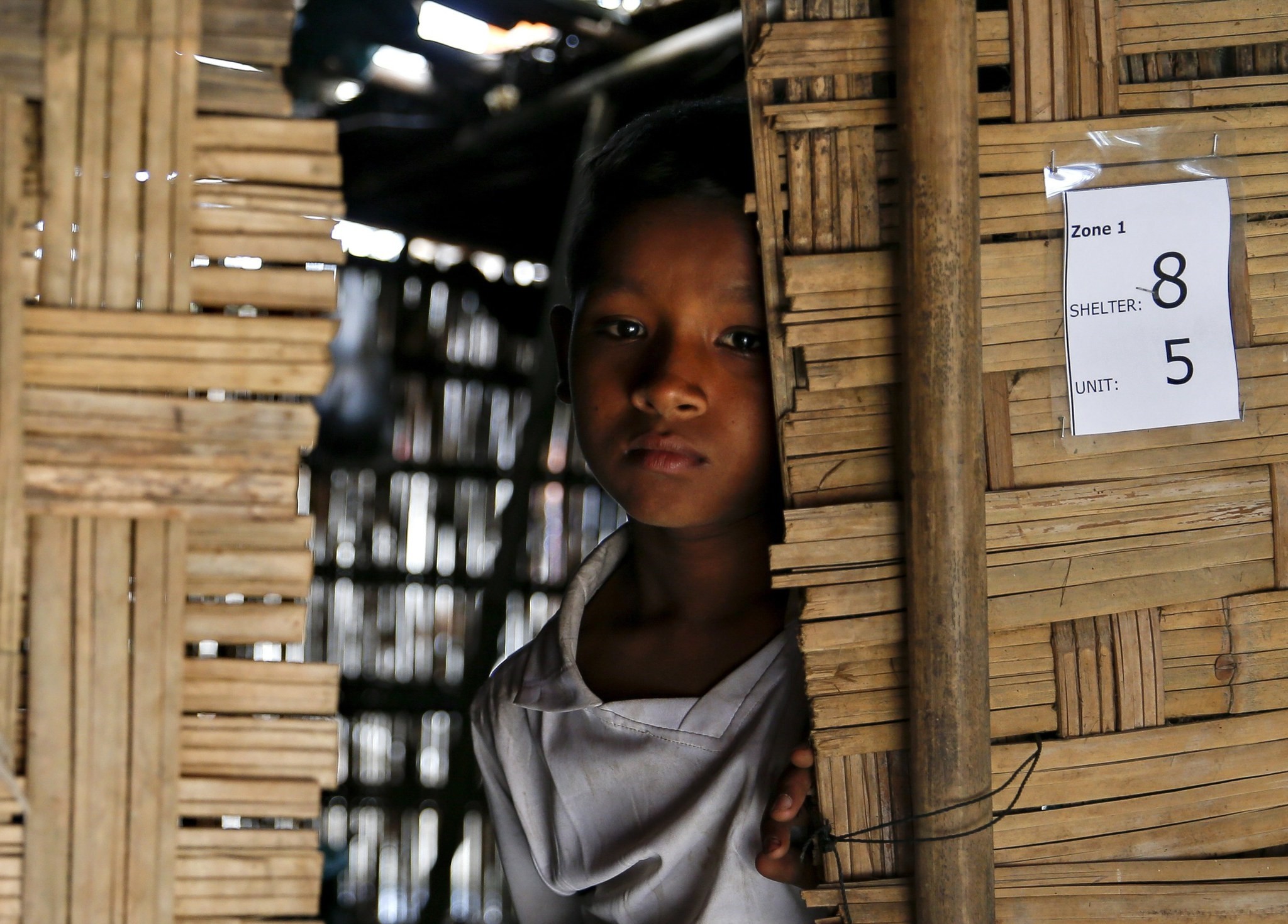 Nabeel Hyseub, 10, a Muslim Rohingya boy, stands inside a shelter at Thet Kel Pyin, an internally displaced person (IDP) camp, in Rakhine State.
by Anadolu Agency May 01, 2017 12:00 am
New Oo initially greeted the news of the closure of the refugee camp where she had lived with her family since 2012 with joy.

"At first, we were happy that we would be home soon," she told Anadolu Agency reporters during a visit to the small hut on the outskirts of Yangon where she now lives with her two adult daughters. "But we also felt fear because we don't know if it will be safe to stay among the people who destroyed our properties."

New Oo and her daughters are Kaman Muslims. Like their co-religionists, the Rohingya, they were targeted by Buddhist nationalists in ethnic violence that erupted in Myanmar's westernmost state, Rakhine, five years ago.

After their home was torched, the 50-year-old, whose husband died 10 years ago, and her daughters were among 54 other Kaman households moved to a camp just a few hundred yards (meters) from the ruins of their house in Ramree, southern Rakhine.

Three weeks ago, after hearing that authorities were going to close the camp, she was excited at the prospect of rebuilding her life.

However, a week later it was shut and she was offered cash, 500,000 Myanmar kyats ($365) per family and 100,000 kyats ($73) for each family member, to help her family resettle in Yangon, Myanmar's commercial capital and largest city.

The families at Ramree were also offered free transport to the city.

"Actually, we did not want that money but we had no choice," New Oo said. "So we just followed the plan."

She left her home town where her family has lived for generations without knowing what would happen to her land and arrived in Yangon on April 19.

New Oo and her neighbors were part of an initial resettlement of 335 households, 215 Rohingya, 55 Kaman and 65 Rakhine Buddhist, who had lived in three camps in Rakhine for the last five years.

Overall, the government plans to resettle around 120,000 people, mostly Rohingya, from Rakhine.

A Rakhine state official told reporters that Muslims were being relocated because of the threat they face from the state's Buddhist majority were they to return home.

"There is still a group of ultra-nationalist Rakhine Buddhists who see the Kaman as the same as Bengalis," he said on condition of anonymity due to restrictions on speaking to the media.

Unlike the Rohingya, the Kaman are recognized by the government as one of the country's 135 ethnic groups and enjoy the citizenship rights that go with that recognition.

The government considers the Rohingya to be Bengali migrants from Bangladesh and, as such, they are denied citizenship, rendering them effectively stateless.

"We believe they can enjoy their citizenship rights outside Rakhine state," the official added, referring to the Kaman.

Fresh violence erupted in Rakhine last October after nine border police were killed. According to the U.N., the security forces subsequently carried out widespread abuse against the Rohingya.

These atrocities included the killing of children and babies, gang rapes, beatings, the burning of villages and disappearances. The government has said 106 people were killed during the operation but Rohingya groups have said approximately 400 were slain.
RELATED TOPICS