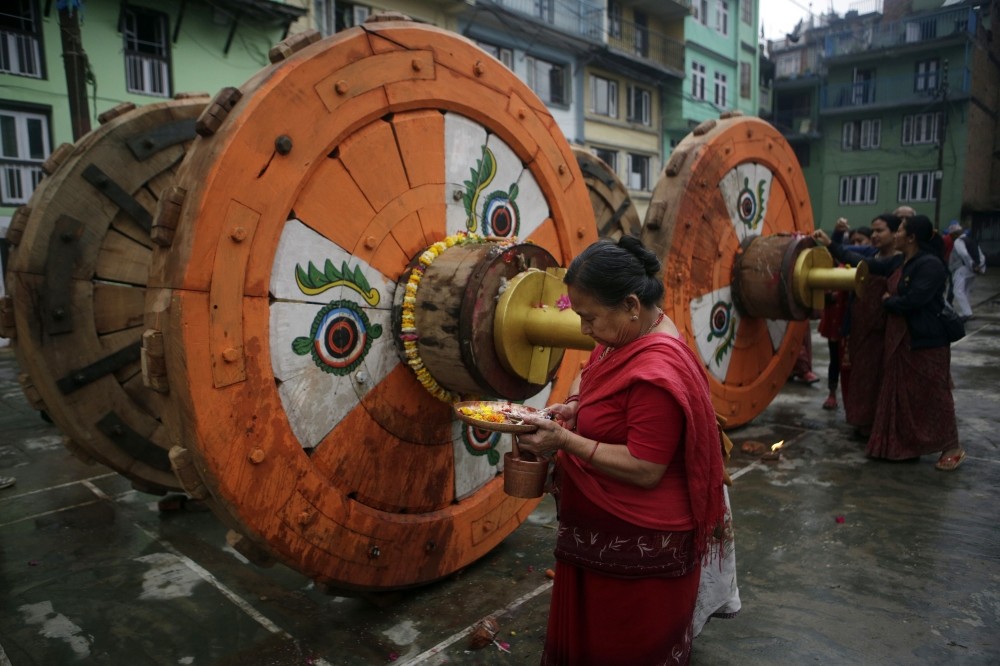 A Hindu woman performs ritualss in front of wheels that will be assembled for the Rato Machindranath Chariot.
by Associated Press May 04, 2017 12:00 am
The last time the five-story-high chariot crashed during Nepal's Rato Machindranath festival, participants knew something bad was coming. Months later, in February 2005, then-King Gyanendra seized absolute power, and the Himalayan nation was in the grip of political unrest, an escalating communist insurgency and a dwindling economy.

This year, as workers from the ethnic Newar group finished building and decorating a new chariot, they hoped for good times ahead. The 15-meter (48-foot) tall wooden chariot, which began its annual monthlong procession on Sunday, is meant to please gods so they can provide for a generous rainfall, harvest and prosperity.

"We have to build it strong so that it does not collapse. If anything happens to the chariot, there will be bad luck for the country," said Krishna Dangol, the latest in a generation of chariot builders.

The Rato Machindra festival, in which Hindu and Buddhist devotees pull two thick ropes tied to the chariot though the narrow streets of Patan, a Kathmandu suburb, preludes the monsoon season in a nation where a majority of population still depend on farming.

It is believed this year is the 1,350th for the chariot. There are no scripts describing when it originated, but the stories have been passed down generations along with the skills and task of building and pulling the chariot.

The chariot is based on a chassis that is only as wide as a small truck. Four giant wheels, which are twice as tall as humans, make it mobile. The wooden wheels are painted with giant eyes, and the towering beams are tied together with canes and covered with green pine leaves.

There is no steering or brakes and men throw wooden blocks under the wheels to turn or stop the chariot.

Devotees line up the street praying when the chariot passes through their neighborhood. It takes days for the chariot to complete the 3.5-kilometer route as it stops in different neighborhoods. People offer flowers, sweets and fruits to Machindranath - a deity whose statue is made from clay and covered in red paint with eyes wide open -and extended family members gather for feasts.

The legend says that around the 7th century, a massive drought hit the Kathmandu Valley, and people believed that only the red deity could bring back rainfall. King Narendra Dev, along with a priest and farmer, traveled to what is now Assam state in India and brought back Karunamaya, or the god of compassion. It is now popularly known as Rato Machindranath.

For generations, men divided in three teams have worked for weeks every spring season to put together the chariot.

The first team, called Barahis, is responsible for the woodwork and repairing the giant wheels, carving the base and the wooden beams.

The team of Barahis would then erect the tower of logs.

Another team of Yanwals are tasked with tying them together with truckloads of cane.

Without using a safety harness, the Yanwal workers hang from a six-story height tying the logs together, wrapping the tower with pine leaves and capping it with Bamo, a circular bamboo tray that resembles a Mexican hat.

"My father and grandfather worked on the chariot and two sons are also building the chariot. We are working for the gods to bring good fortune for the people of the country," said Dangol, 63. His ancestors used to be paid in grain but now get a meager remuneration of about $30.

Amir Nekhu, who leads the Chitrakar team of artists to paint and beautify both the statue and the chariot, said that he began working by helping his father when he was in school and has continued the task ever since.

The last day of the festival used to be reserved for the king, but since the monarchy was abolished in 2008, the president has continued the tradition.
Last Update: May 04, 2017 1:57 am
RELATED TOPICS