Photographer and pilot capture Turkey's wonders from above 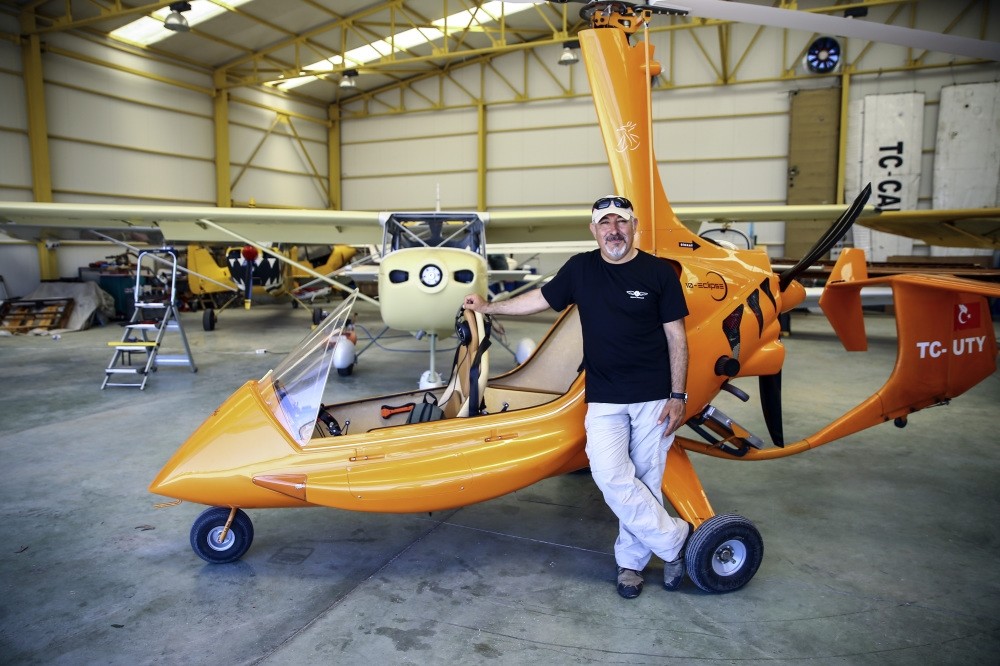 Alp Alper poses in front of gyrocopter with which he and Yavuz photograph Turkeyu2019s wonders from above.
by Anadolu Agency May 17, 2017 12:00 am
Photographer Alp Alper and pilot Murat Yavuz are traveling through Turkey in a gyrocopter, a two-man aircraft with an open cockpit, to photograph the country's historical and natural wonders. The duo began their journey at the end of April in the western Turkish province of Tekirdağ and are continuing to span the coasts of the Aegean and Mediterranean.

Alper, 49, is a pilot who retired from Turkish Airlines after 25 years while Yavuz, 55, is a retired geological engineer and pilot. Their unusual aircraft can stay in the air for three hours nonstop. After setting their course of flight before takeoff, the duo embarks on a route to photograph predetermined locations along the way. Alper and Yavuz are planning to publish a book titled, "Turkey from the Sky," featuring the photos taken on their journey.

Speaking to Anadolu Agency (AA), Alper said the pair aims to promote the historical and natural beauties of Turkey from an aerial perspective. "Our aircraft can fly for three hours once it takes off. After three hours, we have to land and refill the fuel tank. For this project, good planning is key. The flight routes and adherence to a timeline for accurate photographing are crucial. Still, we are a good team; otherwise, we wouldn't be able to effectively do what we have set out to achieve. We have a ground team that helps us when we land for fueling."

The duo recently reached Adana after photographing the Mediterranean coastline. Once they finish in Adana, the two will travel to the provinces of Antakya, Gaziantep, Şanlıurfa, Adıyaman, Elazığ, Erzincan, Erzurum and Kars, aiming to reach Hopa, the most northern point of Turkey. After photographing the Black Sea region, Alper and Yavuz will return to Tekirdağ and offer their project to the eager eyes of photographers and aviation enthusiasts.

Stating that their publication "Turkey from the Sky" has been in process for the last seven years, Alper told AA: "We are a team that believes in promoting Turkey in any way that we can. The objective of this project is to increase recognition everywhere in the world. We will donate a major part of revenue from book sales to the families of martyrs and orphans to encourage children to develop a love for aviation."

Alper said every corner of Turkey has unique, unparalleled beauty and that there are no words to describe what they have witnessed while traversing Turkey from above. Alper said the Cape of Anamur is the place which mesmerized him the most, noting: "Even the harsh winds we encountered while flying over the Cape of Anamur were nice. As we flew over the cape, we forgot to photograph it but the wind reminded us where we were. This is the place that has impressed us the most during our travels."
RELATED TOPICS