Gazan farmer returns to his fields despite losing both legs 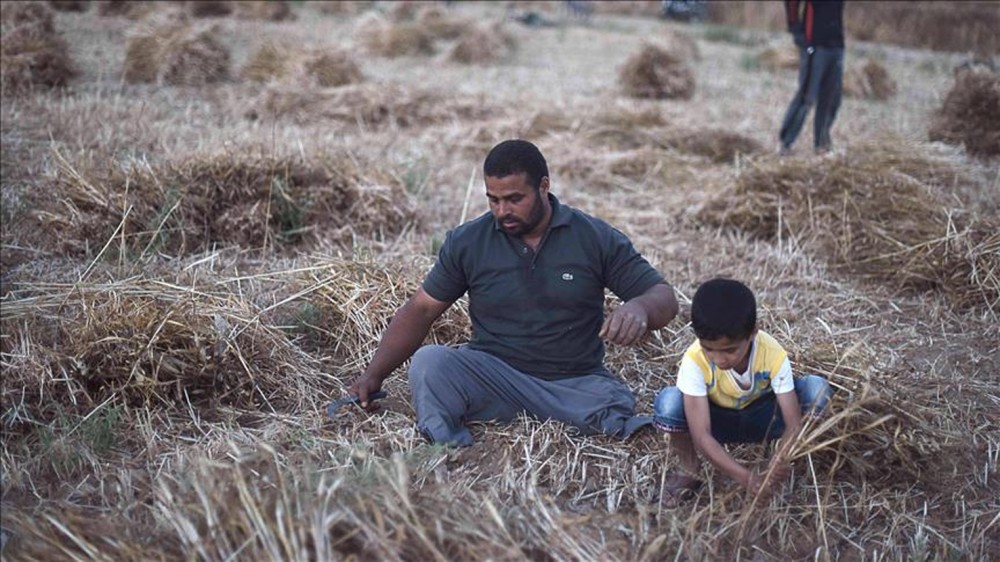 Thrusting his two sizable fists into the earth, Gazan farmer Louay al-Najar lifts his body from the ground and propels it forward in a single, unfaltering motion, one he has perfected to make up for the fact that he lost both his legs during Israel's 2008-2009 onslaught on the Gaza Strip.

In this manner, he moves around his house, climbs ladders, mounts his modified motorcycle and sets off to harvest the wheat growing on his land in the Gaza Strip's Kuzhaa district, located within sight of the Israeli border.

Now that the harvesting season has begun, al-Najar swiftly shuttles across his patch of land, gathering his crops and shouting words of encouragement to his helpers, but it wasn't always this easy.

"I needed determination and will to overcome the hardships of life; to do work around the house, to climb trees and ladders and work my farmland," he told Anadolu Agency.

Al-Najar says he was hit by an Israeli missile toward the end of the three-week-long conflict, in January 2009, while trying to rescue a woman who had already been struck. The woman died before he managed to reach her.

His farmland sits only 400 meters from the Israeli border and has borne the brunt of the perennial conflict.

Khuzaa teems with freshly-painted buildings that replaced hundreds of homes destroyed during Israel's onslaught in 2014, when Israeli forces entered the district and clashed with fighters from Hamas, the resistance group that governs the Gaza Strip.

Bullet-pocked buildings that have yet to be rebuilt and the crumbling minaret of a local mosque still testify to the fierceness of the fighting.

The road leading into the district is lined by Hamas checkpoints, where guards often turn away non-residents due to the proximity of an Israel-enforced buffer zone.

Al-Najar, for his part, who at other times of the year joins his fellow farmers collecting olives, barley and lentils, says there is a danger of being shot at if one gets too close to the border.

While such situations can pose difficulties for him, other farmers, and his family, are always there to help get him out of the area if any danger arises.

But most of the time, his novel methods for coping with his disability have helped him adapt to the point where he, his wife and five children "can forget the tragedy that cost me my legs."