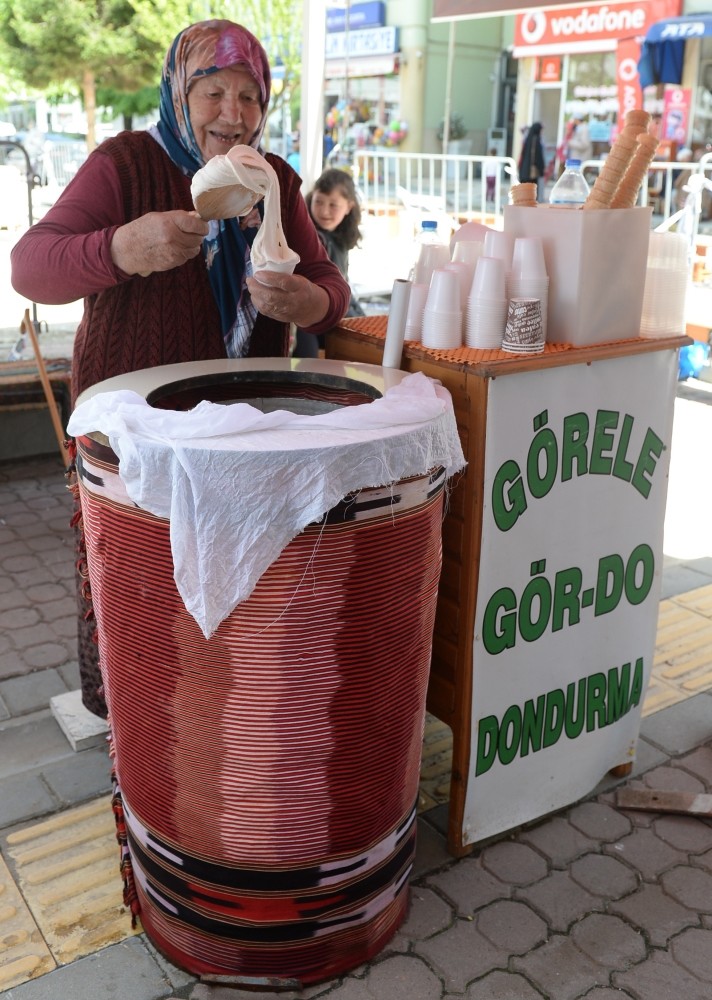 One of the oldest masters of Görele ice cream, 85-year-old Fatma Avcı, has been preparing milk, sugar, salep and licorice, which dates back to 150 years ago.

Learning how to make the ice cream from elders in her family, Avcı taught the secrets of the trade to her son, passing on her 65 years of experience as an ice cream maker.

Being one of the oldest ice cream makers in Görele district, Avcı continues to help her son with key points of the work.

Stating that she learned how to make ice cream from her father and mother-in-law when she was 20, Avcı said that she has produced ice cream since 1952.

"We didn't have today's opportunities in the past. We used to collect snow and carry it to snow wells. One of us would go down in the well and arrange the snow inside. Then we would cover the well tightly so that the snow wouldn't melt. That snow was our deep freezer. The work was so difficult in the past but now it is so easy to make ice cream," she said.

"In the past, the ice cream was made to offer to guests at village weddings. Then, people started to sell it for money. Now, the product sees good sales and Görele ice cream is sold at markets," she added.

Offering information on the process of making Görele ice cream, Avcı said, "We boil milk in a vessel and add ingredients including salep and sugar. The ice cream has to be sold within two days of being frozen."

Avcı's son, Şenol Avcı, 47, stated that he learned the craft from his parents.

"Ice-cream making is a craft that was handed down from our ancestors. I have pursued the work for the last 35 years," Şenol said, adding that he started making the creamy confection after his father's death.

"There are some key points that the new generation still hasn't sort out. I consult with my mother regarding some points. This is such an authentic craft that it has yet to be industrialized. We ask my mom about how our ancestors used to make ice cream 150 years ago and she tries to teach us as well as she can. In a way, we are the last generation pursuing this work. We continue selling ice cream from the month of May to September. Görele ice cream differs from others because of its consistency and softness," he said.