Melania Trump slaps away Donald’s hand after arriving in Israel 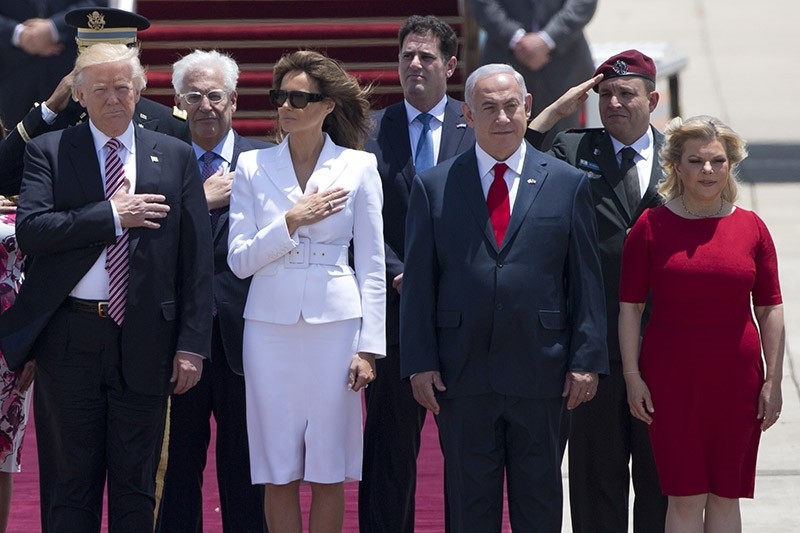 US President Donald Trump and his wife Melania, and Israeli Prime Minister Benjamin Netanyahu and his wife Sara stand during welcome ceremony in Tel Aviv, Monday, May 22,2017. (AP Photo)
by Daily Sabah May 23, 2017 12:00 am

A video of U.S. President Donald Trump during his Israel visit has gone viral, which shows the president reaching out to hold First Lady Melania Trump's hand, only to be swatted away by his wife.

The footage highlights the moment when Melania Trump coldly slapped away her husband's hand as the two were exiting Air Force One at the Ben Gurion Airport in Tel Aviv, while Israeli Prime Minister Benjamin Netanyahu and his wife Sara accompanied the couple.

Melania Trump coldly swats away Donald’s hand as the US president reaches out to his wife during Israel visithttps://t.co/3DXSas4HcI pic.twitter.com/9i69Q7tKT0

The Netanyahu's were happily walking hand in hand, as Trump attempted to reach out to the first lady in full view of cameras.

According to media sources, the White House has not responded to requests for comments.

This was not the first time the couple made headlines with an awkward moment caught on camera.

Last April, Melania Trump was seen nudging Donald Trump during the White House Easter Egg Roll day Monday to remind him to place his hand over his heart during the national anthem.