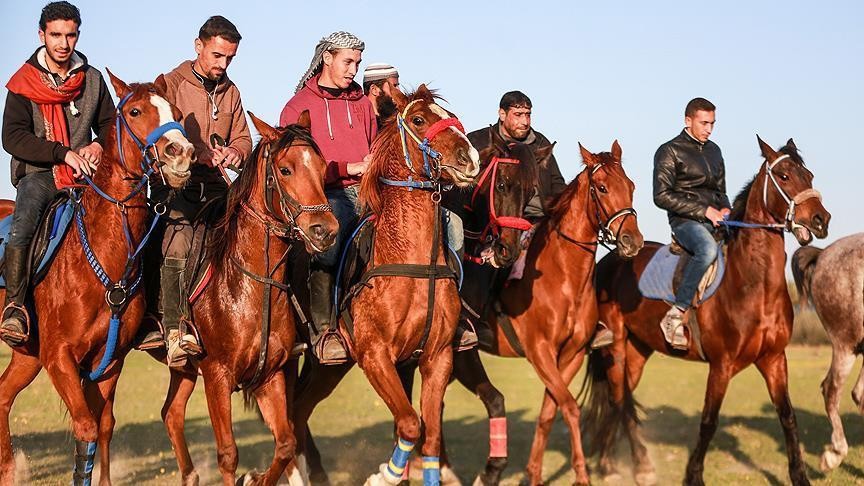 His cherished dream, however, has been dashed by the decade-long Israeli blockade on the seaside Palestinian territory.

"The siege and closure of crossings prevent us from taking part in many races," Abu Zayed told Anadolu Agency (AA).

Abu Zayed is one of the few Gazans who breeds horses in Gaza, which is ruled by the Palestinian resistance group Hamas.

He said he has been riding horses since he was a child.

"I inherited the love of breeding and riding horses from my father, who learned it from my grandfather," Abu Zayed said.

He says the food and care for his horse costs him around $100 monthly. "This is a very high cost in light of the blockade and the tough living conditions in Gaza," he said.

Since 2007, the Gaza Strip has struggled under a crippling Israeli blockade that has deprived its roughly 2 million inhabitants of basic commodities, including food, fuel, medicines and building supplies.

'The blockade strangles us'

Mohammed Abu Maaliq, now in his 20s, got his first horse when he was 12.

"I love horses," he said, adding, "I feed my horse three times a day."

The Palestinian youth laments that there are no high-quality horses in the Gaza Strip due to Israeli restrictions.

"In the past, we used to smuggle horses from Egypt via underground tunnels," he said.

He said he wants to compete with his 9-year-old horse in Arab and international races in the future.

"The blockade has strangled us," he said. "There are no big spaces [to practice riding], and potential is limited," he said.