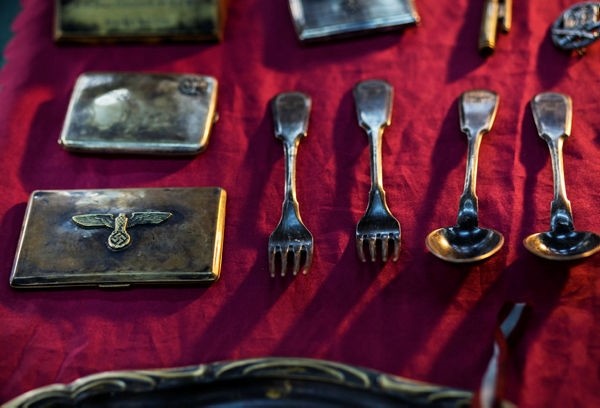 Antique pieces attracts collectors from all around Turkey.
by Anadolu Agency Jun 13, 2017 12:00 am

Offering various pieces including dresses, home furniture, manufactured items and even fish, the second-hand bazaar in İzmir's Konak district has become the golden boy among antique dealers and collectors across the country.

Located on an area about 5,000 square meters in the Yenişehir neighborhood, the bazaar, which is open to visit only on Sundays, serves locals who are looking for cheap bargains.

Set up in the early hours of the morning and operating actively until mid-day, the "flea market" has recently attracted a great deal of attention from antique dealers and collectors.

Stating that vintage irons are the most popular items at the bazaar, Vardar said, "It is highly difficult to find antique flat irons nowadays. The cheapest you can find has a price tag of TL 100 ($35). In addition, gas ovens and oil lamps are also very popular. Their minimum price is TL 25 ($7.50). If the customer is an average local, these items are bought to decorate the home; however, antique dealers often purchase these items and resell them for TL 200 ($60)."

Opening a stand in the bazaar for the last one-and-a-half years, 65 year-old retired teacher Turgay Aladağ stated that the bazaar is seeing good business.

Selling oil lamps, tinned trays and home furniture he has collected, Aladağ said, "I especially see antique dealers and collectors who stop by my stand. There are customers even out of İzmir. For example, they buy a tinned tray set for TL 200 from me and then sell it at a higher price to antique enthusiasts. I don't require high profits as I am retired; thus, it is enough for me to earn around TL 2,000 ($500) at the flea market."

Aladağ remarked that people who are bored with their home furnishings or accessories and even those looking to make some money come to the bazaar in the early hours of the morning to make purchases and sell their goods, most of which are re-sold to new customers later the same day.

'Tradeswomen of the flea market'

One of the tradeswomen in the bazaar Ayten Altun expressed happiness when describing her experience working at the bazaar for years.

Stating that the treasures found in the bazaar are satisfying both for the vendors and customers alike, Altun said, "None of the vendors in the bazaar behaves negatively in terms of the treasures they collect. We are functioning as mediators here. For example, doormen and collectors bring what they have collected to us. I have customers who pre-order what they want, describing desired products in detail. For example, while you can buy a brand-new cooking pot for an average of TL 50 ($15) here you can find a second-hand pot for TL 20 ($5). Locals prefer to shop at this flea market because of the cheaper prices."

Visiting the bazaar to buy fish for an aquarium, 25-year-old Niyazi Maden from the Torbalı district of İzmir said that he purchases fish at the bazaar for only TL 15 ($4.50), which he sells for TL 25 ($5) in his local district.

"This bazaar offers everything we need and, what is even better is that the prices are very economic here. Visiting this bazaar has become a habit for me," Maden said, stating that he visits the bazaar every week to do his shopping.