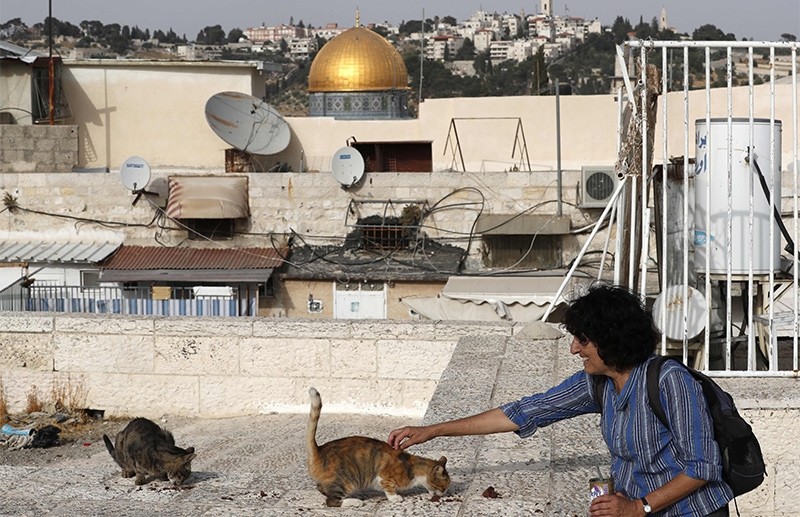 It is nearly midnight when Tova Saul, an Orthodox Jew, approaches the Muslim quarter of Jerusalem's Old City, carrying two large cases and a variety of contraptions.

Within an hour, a row will have started that will see four people, including Saul, dragged to a police station. But for now she's searching for cats.

For more than two decades she has fed and cared for hundreds of cats, earning the informal title of the walled Old City's "cat lady."

It's not a nickname she likes.

"When people refer to me as the cat lady, they are actually defining everybody else as people who won't lift a finger to help an animal in need. So really it's an insult to the human race," she told AFP.

In much of the Mediterranean basin, where winters are mild and open piles of rubbish plentiful, stray cats are ubiquitous.

The labyrinthine Old City, nearly a square kilometer (less than half a square mile) and home to some of the holiest sites in Christianity, Islam and Judaism, also hosts hundreds, perhaps thousands of alley cats.

Across Jerusalem there are more than 100,000 strays, the municipality estimates, with only a limited government plan to deal with the problems they pose.

But there is Saul and a few other volunteers.

Saul, who is unmarried, came to Israel in the 1980s from the United States and has been caring for animals ever since.

Since she started counting properly in 2009 she has caught and had spayed over 600 cats, while feeding thousands more.

"Six hundred and twenty cats having kittens -- they can have kittens two or three times a year, each cat having three or four kittens at a time," she said.

The rest of her time, Saul, who is in her fifties, with curly brown hair and loose fitting clothes, is a tour guide and Airbnb host.

The municipality used to poison strays but that program was scrapped more than a decade ago, said Assaf Brill, head of the city's veterinary service.

Numbers have since multiplied and budgets remain tight.

"Jerusalem has a very poor population and the budget is needed for a lot of things," he said.

They rely on volunteers and Saul is one of the city's most active -- working in areas many Jewish people are unwilling to visit.

She started in the Old City's Jewish Quarter, where she lives in a two-bedroom flat currently filled with five cats and six kittens.

She feeds them out of a frying pan, while the spare room where a sick feline is quarantined has been closed off.

Within a few years she has trapped and had spayed all the female cats in the Jewish Quarter.

AFP accompanied Saul on a mission in the Muslim Quarter on an average Wednesday night.

"There have been a few times where they (Palestinians) have said: 'What are you doing?' And I explain to them and they look at me and they have these big brown eyes, these beautiful eyes, and they say: 'Wow, thank you. You have a good heart.'"

She usually likes to work between one and five in the morning when the streets are deserted, but this night starts a little earlier.

She spies a cat outside the gate she hasn't seen before and traps it -- it will be taken to the city vet in the morning.

Then she enters the Old City and sets up her baited traps. A cat is about to enter when a group of Palestinian youths arrive, startling it. After some terse words they move on.

Within minutes, three ultra-Orthodox Jewish men stop and stand by the trap.

She asks them, politely at first, to move on but they refuse. Within a few minutes the scene escalates.

"The Nazis behaved exactly like that," one man says. "Hitler kissed his dog at the same time as sending people to the crematorium."

Saul is incandescent. "A Jew calling another Jew a Nazi?" she shouts.

She throws hummus at the man, splattering his back. Police arrive and all four are taken to the station.

After half-hearted apologies, they are released without charges, but by now it is nearly 2:30 am.

Saul heads back to the car to grab her traps. For Jerusalem's cat lady, the night is just getting started.