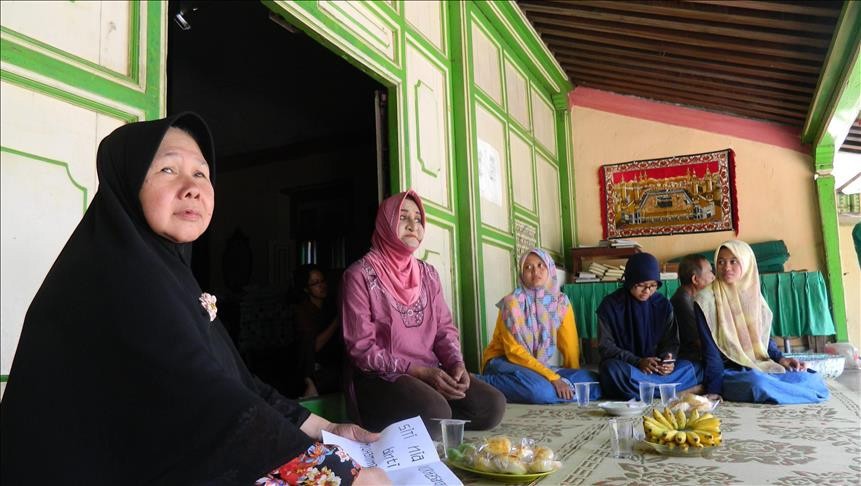 The women living at the school are united in their desire to study Islam and worship freely.
by Anadolu Agency Sep 12, 2017 12:00 am

At the al-Fatah boarding school in Indonesia's Yogyakarta, 42 transgender women find a safe haven where they can learn about Islam and pray without the fear of being mocked

In a quiet city famed for its ancient temples, a group of women pray at a religious boarding school formed in the wake of a deadly earthquake that ravaged the area more than a decade ago.

Al-Fatah boarding school was founded after the Bantul quake left more than 5,700 people dead in 2006.

However, the students at the school in Yogyakarta, a university town in the southern part of Central Java, are different from those at the many other Islamic schools dotted across Indonesia - they were born as men but live as women.

The 42 women who study at Al-Fatah are under the charge of Shinta Ratri, 55, the school's director.

She was among those transgender women who came together after the 2006 earthquake to offer prayers for the victims of the disaster.

The meetings became more regular, with lectures from preachers and Quran classes, and two years later the school was established as a place to study Islam and worship.

The school's guests came to be able to pray and study free of the awkward gaze of fellow worshipers.

"When worshiping in the mosque with many people, there is a sense of discomfort," Ratri said.

Anadolu Agency visited the school during the festival of Eid al-Adha as the students prepared two sheep to be sacrificed and shared among the local community.

Also visiting at the same time were a group of university students, human rights activists and locals who gathered at the school to mark the day of sacrifice.

Ratri said those women living at the school were united in their desire to study Islam and worship freely.

Unlike other Islamic schools, known as pesantren in Indonesia, many of the students are middle-aged by the time they come to study.

"The majority of transvestites only graduated from junior high school because, at that age, they started to leave their families," Ratri, who wears a traditional headscarf, said.

Most transgender people in Indonesia face alienation from their families and difficulty in finding work, forcing many to seek employment on the margins of society despite Java's relatively relaxed attitudes to transgender women, known as "waria" in Indonesia.

"Some of them come here at over 40 years old because at this age they feel the need to get closer to God," Ratri said.

Yuni Shara's story is typical of many at the school in the historic district of Kotagede.

Now aged 50, she was thrown out by her family at the age of 29 after finalizing her decision to live as a woman full-time.

She worked as a street singer before coming to the school. She now works as a human rights activist.

"I used to be the subject of jokes when praying at the mosque but now I am relieved to be able to worship freely," she told Anadolu Agency. "We want to be accepted by society. At least let us worship quietly."

She added: "We are guided by four preachers, two of them women. I record what my tutor says - that we should be good listeners, loving to others, not get tired of studying and keep learning."

As well as praying together and studying the Quran, students also discuss the particular challenges facing them as transgender women. The school also arranges job training, medical check-ups and offers services such as free hair-styling.

Fellow student Inul, who like many Indonesians uses just one name, said her last two years at the school had helped her become a better person.

"After joining Al-Fatah, I am more able to control myself [and know] that I should behave better," she said.

Despite some support from the government and mainstream Islamic groups, the school faces opposition from hardliners.

In February last year, one group stormed the school, forcing it to close for four months.

"They are provoked by the issue that we make heresies," Ratri said. " How could we make a new religious teaching?"

She praised a decree passed by President Joko Widodo in July aimed at tackling hardline groups in the world's largest Muslim-majority country.

"The hardliners will rethink if they want to make trouble," Ratri said.

As part of their activities in the local community, the school has organized trips to university campuses to spread a broader understanding of transgender identity.

"When people have accepted us, then our lives will be better, both in terms of education and work," Ratri explained.

Arif Nuh Safri, a scholar at Sunan Kalijaga State Islamic University who preaches at the school, said everyone deserved the opportunity to worship and study Islam freely.

"Transgender [people], although often mocked and considered inappropriate to praying, also have a desire to be close to God," he said.

Safri said transgender women faced tremendous pressure from their families and society, which could be alleviated through worship. "In that distress, religion can give peace, but how can they be calm if they have trouble worshiping?" he asked.

"When the family can accept them, then their education and spirituality will be better."