From 'stalker' to 'walker': Woman gets dream job as zombie 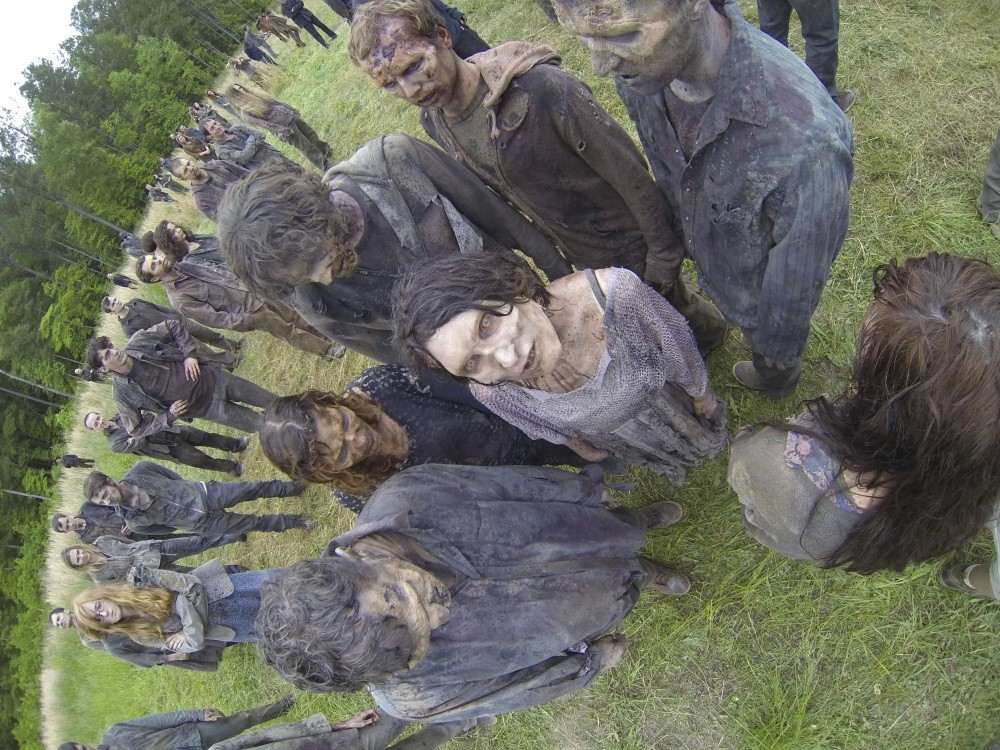 When she's not spending time with her grandchildren, Terrie Hamrick is likely dressed as a zombie.

Hamrick's dream of being a "walker" for "The Walking Dead" came true two seasons ago when she was cast as an extra by AMC, the company that produces the critically acclaimed television series. The show, based on graphic novels, features a group of people fighting to survive a zombie apocalypse.

"Since the show started, I told my children, 'I want to be a walker,'" said Hamrick, 68, who added that she never really believed the dream that has been at the top of her bucket list since 2012 would become reality.

She's one of the 15 regular walkers and even has her own outfit on the set labeled with her name that she wears while filming, she said. The days are grueling: 14 hours -- sometimes longer -- in the Georgia heat.

The show has filmed in Senoia, about 35 miles (55 kilometers) south of Atlanta, and nearby Haralson since 2012.

Hamrick proudly acknowledges that she was one of the original "walker stalkers" -- extreme fans who hang out by the show's set. She became so well known around the set that Michael Rooker, who plays Merle Dixon, warmly called her his "little walker stalker," and Andrew Lincoln, who plays lead character Sheriff Rick Grimes, would point to her whenever he saw her in the distance, Hamrick said.

Despite her newfound fame, Hamrick hasn't quit her other day job: working as a walker for a tour company in Haralson that brings "The Walking Dead" to life for fans. The owner of The Walkin Dead Haralson Tours and Events, Jamie Thompson, scouts locations in Senoia and Haralson for the show.

While in Senoia, production is filmed on sets, but in Haralson, they film on lots, Thompson said. On the tour, fans are guided by a man playing the part of Daryl Dixon, one of the show's most popular characters, and get to relive moments from the series.

That's where Hamrick comes in. She makes her entrance in bloody zombie makeup, both terrorizing and delighting those on the tour.

One minute she's snarling, ready to devour them. Moments later, she transforms into her grandmotherly self, laughing and taking photos with fans.

Less than 5 feet (150 centimeters) tall -- she officially measures 4 feet, 10-and-a-half inches (147 centimeters), she said, stressing the importance of that extra half-inch -- she's doesn't seem at all threatening. But once artist Michelle Molanari transforms her into a gory monster, fans on the streets of Senoia certainly are cautious as they approach, many uttering under their breath, "It looks so real."

"Miss Terrie is a tiny, gentle, soft-spoken grandmother who's always ready with a kind word about everyone," Molanari said.

Between the series and daily Haralson tours, she's hooked on the buzz of the entertainment industry.

"It's exciting for me to see myself on there," Hamrick said. "The show is great, the actors are great, this place is great."

Hamrick even has her own fans now. She recently created a Facebook fan page, where she posts photos of the cast and behind-the-scenes shots of the tours. Within a week, it had nearly 1,000 likes.

"People mob you wanting pictures," she said. "It's so exciting."