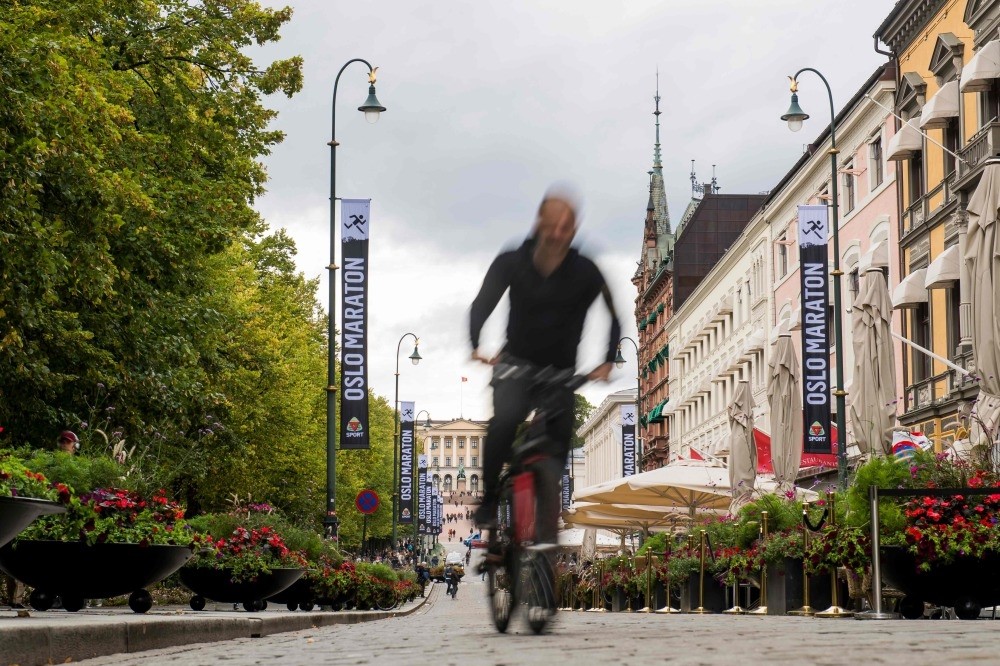 Determined to go green, Oslo is slowly but surely ridding its city center of motorists, angering some who say the "war on cars" is putting the brakes on individual freedoms.

"We have to give the city back to the people, so children can play safely, so elderly people can have more benches to sit on," argues Hanna Marcussen outside Oslo's City Hall, its cobblestone square recently blocked off to traffic. "In order to do that, you have to get rid of cars, which take up a disproportionate amount of space," the Greens city councilor in charge of urban development says. While they may not seem spectacular, Oslo has devised a series of highly dissuasive measures: it has eliminated 700 parking spots, re-zoned the city center, turned streets into pedestrian walkways, and has raised the price of congestion tolls.

It's not the outright ban that was initially feared - and which prompted one lawmaker to call it "a Berlin Wall against motorists." But in a 1.9-square-kilometer (0.7-square-mile) zone in Oslo's center - where some 5,500 people live and 120,000 people work - the only cars to be seen are taxis, vehicles for the handicapped, emergency vehicles and a few lost and confused motorists. "In 2020, we will have eliminated most private cars," says Hanna Marcussen.

Sidewalk cafes can already be seen popping up, as well as outdoor furniture, bike paths and bike stands. Designated "European Green Capital" by the European Commission for 2019, Oslo hopes the move will purify its air, encourage more cultural activities and reduce carbon dioxide emissions, which it aims to cut by 95 percent by 2030. Oslo is spearheading a broader trend, with other big cities like Paris, Madrid, Brussels and Helsinki all trying to reverse from the car-based society.

"What is most tragic about this war on cars is that politicians are attacking people's freedoms and their wallets," protests Jarle Aabo.

A public relations executive, he writes the newsletter "Yes to Cars in Oslo," which counts almost 23,000 members on Facebook - where comments are at times harsh. "What people fear is that the center of Oslo will die, that it will become a very depressing place," he says, contradicting the official line. "I don't know how all of this is going to end but I don't think happy cyclists are going to come do street performances and dances in January when it's -20 C with snow up to their knees."And yet, cyclists are thrilled. "It's going to be great," says Christopher Olsson, a photographer who usually bikes around town. "There are a lot of conflicts between motorists and cyclists." "But if we totally eliminate cars, we need to improve public transport, both in terms of price and quality," he adds.

And that's a big problem. With a single ticket costing almost six euros ($7), public transport remains expensive. Users also complain about delays and problems, made worse when they have to wait in subzero temperatures in winter.

While more than half of residents are in favor of a city center "with as few cars as possible," some shopkeepers are not happy. A stone's throw from City Hall, a bed store located inside a "no-car" zone since June 1 is glaringly empty. "Our clients complain that they can't come," owner Terje Cosma explains. "We sell merchandise that you can't walk out with under your arm, so a lot of them are dependent on cars."

While the shop's sales were doing well until June, business has since collapsed. Two neighboring boutiques have already closed up shop. Customers are heading to large shopping centers outside the city instead. "Restaurants, cafes and bars will probably benefit, but not specialized shops. We'll lose variety," laments Cosma. Marcussen remains nonetheless confident."With or without cars, a city center will always change shape over time," she insists. "If there's one place where I really think shops will continue to do well, it's in city centers where you can combine shopping with outings to cultural events or restaurants."